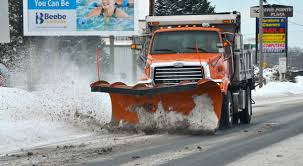 Matt Ball on December 10, 2015 - in Corporate, Maintenance, Roads, Sensors
Smyrna—Any resident with a computer or a smart phone will be able to track the real-time positions of DelDOT’s plows during snow storms this year, thanks to an innovative, web-based program unveiled by Delaware Department of Transportation officials today at their Transportation Management Center.

The Snow Plow Tracker uses Global Positioning System sensors installed in each of their more than 300 plows, to transmit their locations to a program that will display each plow’s position on any resident’s smart phone or computer.

Offering this information to the public is part of a larger effort to show the public how DelDOT utilizes its resources, said DelDOT Secretary Jennifer Cohan. “I’m a huge proponent of transparency in government and the snow plow tracker is a great way for us to show the people of Delaware how hard we work on their behalf during a snow storm,” Cohan said. “We will be testing and refining the snow plow tracker this winter, and we have plans to add more features to this system in the coming years.”

At a cost of $22,440.00, the overall goal of the new application is to better inform the public, she said. “We believe the snow plow tracker is going to help us provide the public with a better understanding of what we do to manage winter storms.”

Gene Donaldson, the director of DelDOT’s TMC, said the Snow Plow Tracker will only be activated during snow events.

“All of our 330 plows have this tracking software installed,” Donaldson said. “The public will only see the trucks that are in motion whether they are actively plowing, or salting – or perhaps in transit to an assigned location so they can begin plowing and salting elsewhere.”

This year, DelDOT does not have the ability to show on the app whether a truck is plowing, salting, or driving to another location, but officials said they hope to make this upgrade in the next year or two, depending on the results from the testing this year.

Donaldson explained that at any one time, not all of the 300 trucks will be visible on the app. “Whenever a vehicle is idle or stopped for more than 10 minutes it will no longer be shown. During snow events, trucks idle for various reasons including meal, restroom or rest breaks, mechanical issues, driver changes, reloading with salt or fueling.”

To download the free DelDOT App search for “DelDOT” at the Google Play and Apple App stores. On the web, DelDOT’s interactive map is at www.deldot.gov