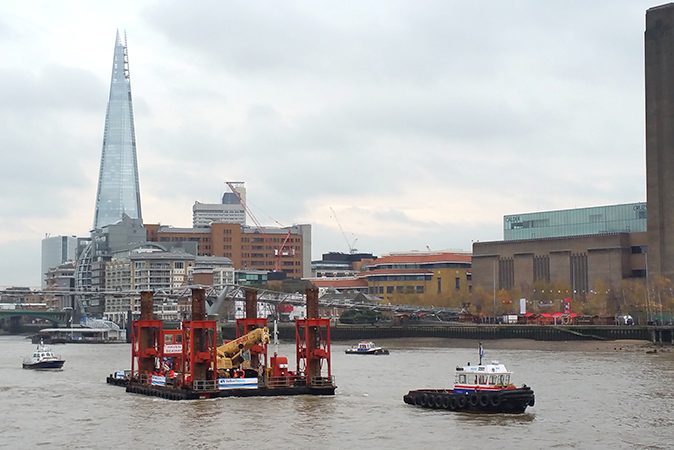 Two boats – ‘Shake Dog’ and ‘Bull Dog’ – pushed a barge supporting a crane into position near Blackfriars Bridge, to allow work to start on a new pier in preparation for construction of the long-awaited super sewer.

The 25km tunnel will tackle the pollution of the tens of millions of tonnes of sewage overflowing into the tidal River Thames every year.

Andy Alder, Central Project Delivery Manager for Tideway, said: “Getting the barge into place was no mean feat. The 20m wide barge had to be carefully threaded under seven bridges and through the traffic on one of the busiest working rivers in the world. Alongside the man-made challenges, the crane also needed perfect tidal water levels and good weather before the movement could go ahead.

“This crane will give us the capability that we need to prepare the Blackfriars site for our vital work to upgrade London’s sewerage system.

“This work is taking place directly next to one of Sir Joseph Bazalgette’s famous interceptor sewers in the embankment, so it’s a fitting place to start our work.”

The new pier for Thames Clippers users will be built to the eastern side of Blackfriars Railway Bridge, and is due to come into use later next year.

The work, which is being undertaken by VolkerStevin for Tideway, will also include building a new staircase and lift connecting the Embankment and Blackfriars Bridge.

Every year, tens of millions of tonnes of sewage overflows into the River Thames from Combined Sewage Overflow (CSO) points along the river. The Thames Tideway Tunnel will intercept sewage from the 34 most polluting CSOs, including the Fleet sewer at Blackfriars, before transferring it to Beckton in east London for treatment.

During construction, Tideway is aiming to transport 90% of spoil from the main tunnel by the river, drastically cutting down on the number of lorry trips that would otherwise be needed.