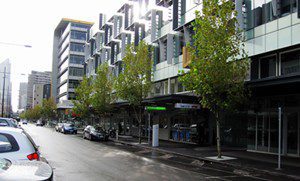 Urban environments Down Under aren’t all that different than those in the United States. They also struggle with contaminated water running off and causing pollution. In response, cities often use natural landscapes of soil, grasses, and trees. These biofiltration systems capture and filter the runoff.

How well do they filter runoff? Research on how soils and woody plants like trees filter water is lacking. In response, researchers at the University of Melbourne designed an experiment.

Researchers planted four different trees commonly used as street trees in Australia in three different soil types (leaving some unplanted to serve as controls). To these, they applied either a solution similar to stormwater or regular tap water. The stormwater contained high levels of nutrients such as nitrogen and phosphorus. High levels of these nutrients are typically present in stormwater in part because of fertilizer runoff.

Researcher Liz Denman, now a member of the Landscape and Urban Design group at VicRoads, explains that high levels of nitrogen and phosphorus can quickly go from nutrient to contaminate. The levels stimulate algal “blooms” – or higher than normal algae content in water bodies. Algae consume oxygen in the water, especially as they die and decompose. They also block the sun from reaching areas below them, upsetting the natural state of the water body.  The lower oxygen levels can result in fish deaths, a loss of biodiversity in the waters, and dead zones.

Some Australia states use mandates as a response. “The planning provisions in the Australian state where I live have a clause that relates to water management in residential subdivisions,” she adds. “This mandates targets for pollutant load reductions. In most cases, these guidelines require the incorporation of water quality treatment systems.”

Through the 13-month experiment, the group measured how well the different tree species grew when watered with stormwater. They also looked at how well the trees took extra nutrients out of the stormwater.

The trees studied were from four species: red box, brush box, white bottlebrush, and oriental plane. All four species receiving stormwater grew significantly larger than those receiving tap water, demonstrating they all have the potential to thrive under urban conditions.

Additionally, the results showed the trees are good at unpacking nutrients from stormwater. Scientists collected the water that drained from the bottom of the experimental pots for a period of two hours after watering. This water contained fewer undesired nutrients when it came from the planted soils. The unplanted soils actually leached nutrients. The different tree species did not show much difference in how many nutrients they removed from the stormwater. They all performed well in the study.

“Species selection was not essential to maximize nutrient removal performance of biofiltration systems,” Denman says, although overall it was more difficult for the trees and soil to reduce nitrogen than phosphorus.

Based on these findings, Denman suggests using a variety of trees. “Biodiversity of vegetation within our cities is important and street tree selection should not be based on a single criterion,” Denman says.

Additionally, one species will not fit everywhere. “The selection of stormwater treatment measures suitable for highly urbanized streets is restricted by the limited available space combined with the need for functional and aesthetically pleasing landscapes,” she says.

Biofiltration systems are already in place in many large Australian cities. Denman adds that further evaluations are needed to test the effectiveness of the trees as they mature or go through extremely wet or dry periods.

This research was recently published in the Journal of Environmental Quality.