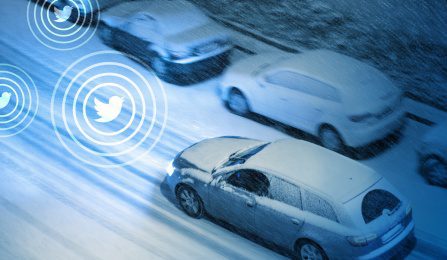 BUFFALO, N.Y.—Go ahead, rant about the snow on Twitter. It can ease traffic on slippery, congested roads.

That’s the crux of a University at Buffalo study which examined how weather-related tweets can be analyzed to bolster computer models that, among other things, recommend safe driving speeds and which roads motorists should avoid during inclement weather.

“It doesn’t matter if someone tweets about how beautiful the snow is or if they’re complaining about unplowed roads. Twitter users provide an unparalleled amount of hyperlocal data that we can use to improve our ability to direct traffic during snowstorms and adverse weather,” said Adel Sadek, PhD, director of UB’s Institute for Sustainable Transportation and Logistics, and the study’s lead author.

Co-authors of the study, which was published in October in the journal Transportation Research Record, include Qing He, PhD, The Stephen Still Assistant Professor in Transportation Engineering and Logistics at UB; Jing Gao, PhD, assistant professor in the Department of Computer Science and Engineering at UB; Ming Ni, a PhD candidate at UB; and Lei Lin, who earned a PhD from UB in 2015.

Traffic planners rely on models that analyze vehicular data from cameras and sensors, as well as weather data from nearby weather stations.

The approach works, however, its accuracy is limited because traffic and weather observations do not provide information on road surface conditions. For example, the model does not consider ice that lingers after a storm, or that snowplows have cleared a road.

Twitter can help address this limitation because its users often tweet about the weather and road surface conditions, and many opt to share their location via GPS.

The study examined more than 360,000 tweets in the Buffalo Niagara region from 19 days in December 2013. Researchers identified roughly 3,000 relevant tweets by tagging keywords such as “snow” and “melt.”

·         The roads are a hot mess out in the burbs all over. Snowing like CRAZY up in here … drive safe everyone.

Once the number of events reach a threshold for a given time, they are counted as a “Twitter weather event.” Researchers tested the reliability of these events through metrics designed to eliminate tweets that do not match actual weather. Because the tweets contain geographic coordinates, researchers were able to map the exact locations of where the inclement weather was reported.

Next, they looked at the timing of the tweets and saw a pattern. When snow falls, the number of weather-related tweets increases, the average motor vehicle speed drops and traffic volumes slowly decrease. (The yellow sections of the graph below show the pattern.) Researchers then inserted the Twitter data into a model containing traffic and weather information, and found that the incorporation of such data improved the accuracy of such models. In particular, researchers found Twitter data to be more effective during the day (when more people tweet), and where the population is bigger (in the study’s case, Buffalo has roughly five times more people than Niagara Falls, New York).

More precise models can usher in a host of improvements to freeways during inclement weather. For example, they will enable traffic planners to recommend better safe driving speeds, which roads need to be cleared of snow or avoided, and expected arrival times for motorists.

Researchers plan to continue improving their model by acquiring additional Twitter data for longer periods of time and at different locations.