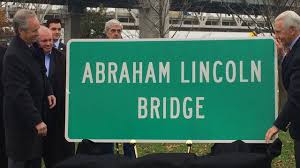 LOUISVILLE, Ky. – Governor Steve Beshear today announced that the new Ohio River bridge between Kentucky and Indiana in downtown Louisville will be named the Abraham Lincoln Bridge – connecting, as it does, the states of Lincoln’s birth and raising.

The Governor said that Lincoln was perhaps the most important single figure in American history, and worthy of the commemoration for his connections to the two states spanned by the new bridge.

“Lincoln led our nation through its bloodiest and greatest constitutional and political crisis – the American Civil War,” Gov. Beshear said. “But at the end of that national trauma, we remained a ‘United’ States of America. It’s therefore fitting that we honor Lincoln’s legacy with a bridge that further unites Kentucky, where he was born, with Indiana, where he emigrated as a youth and grew to adulthood.”

The new bridge will open to traffic before Christmas. The downtown crossing is part of the $2.3 billion Louisville-Southern Indiana Ohio River Bridges Project. It eventually will carry all northbound Interstate 65 traffic between Louisville and Jeffersonville, Indiana. It is being built alongside the current I-65 bridge – the John F. Kennedy Memorial Bridge – which will be converted to carry southbound traffic only.

The new downtown bridge is a magnificent, “cable stay” structure, with giant steel cables strung from three pairs of towers supporting a six-lane deck for traffic.

Building a new interstate bridge across the Ohio River in Louisville had been discussed for decades, but became real in December 2011 when Gov. Beshear and then-Indiana Gov. Mitch Daniels instructed their staffs to cut costs and make the project financially feasible. The groundbreaking ceremony was held 18 months later, in June 2013.

Naming of the new downtown bridge has been the subject of much public discussion, escalating in recent weeks as the bridge neared completion. Gov. Beshear noted that many names had been suggested to his office and the Kentucky Transportation Cabinet. He said he settled on Lincoln’s name because of the great president’s historical significance to Kentucky and Indiana.

“For both Kentucky and Indiana, our connections to Abraham Lincoln endure as a source of great inspiration and pride,” Gov. Beshear said.

“We’re fortunate in Louisville and Kentucky to have a long list of worthy individuals for whom this magnificent bridge could be named, but Lincoln towers above all of them,” said Mayor Fischer.  “It’s also fitting that the Lincoln bridge runs alongside the Kennedy bridge – two Presidents of two different eras and two different parties, but who both dedicated their lives to helping our country in times of turmoil.”

The 16th president was born in 1809 in a log cabin at present-day Hodgenville in LaRue County, Kentucky. The Abraham Lincoln Birthplace National Historical Park, established 99 years ago, encompasses the cabin site and a nearby farm on Knob Creek, where Lincoln lived from ages 2 to 7.

The family migrated to present-day Spencer County, Indiana, in 1816. The Indiana home site is now preserved as the Lincoln Boyhood National Memorial. Lincoln remained in Indiana until 1830, when he moved to Illinois.