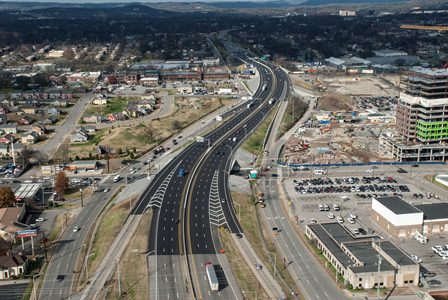 Friday’s event marked the end of the project known as Fast Fix 8, which began in April of this year when Kiewit Infrastructure Co. was awarded the contract to replace eight bridges along I-40 using Accelerated Bridge Construction (ABC). Originally estimated to be finished in June 2016 with 13-weekend interstate closures, contract crews completed the work ahead of schedule last month with only 10-weekend closures.

The $62 million rehabilitation project included the removal and replacement of four twin bridges along I-40 that crossed over Herman Street, Clinton Street, Jo Johnston Avenue, and Charlotte Avenue. Built in 1968, the eastbound and westbound bridges showed advanced signs of deterioration and required near-constant maintenance prior to the Fast Fix 8 project.

During the interstate closures, all traffic was detoured beginning Friday night, allowing workers, equipment, and materials to access the bridge sites over the weekend. Work continued around the clock in order to have the roadway ready by Monday morning rush hour.

“Traditional bridge replacement methods would have required lane closures on this stretch of I-40 for as many as three years,” said TDOT Commissioner Schroer. “This innovative approach saved drivers countless hours of delays and minimized the impacts on area businesses and residents. The success of the Fast Fix 8 project shows how accelerated construction can work, particularly in our urban areas.”

Sen. Thelma Harper (D-Nashville) and Rep. Bill Beck (D-Nashville) represent Davidson County in the Tennessee General Assembly and were on hand for the celebration. Local leaders, including Nashville Area Chamber of Commerce President Ralph Schulz, were also in attendance.