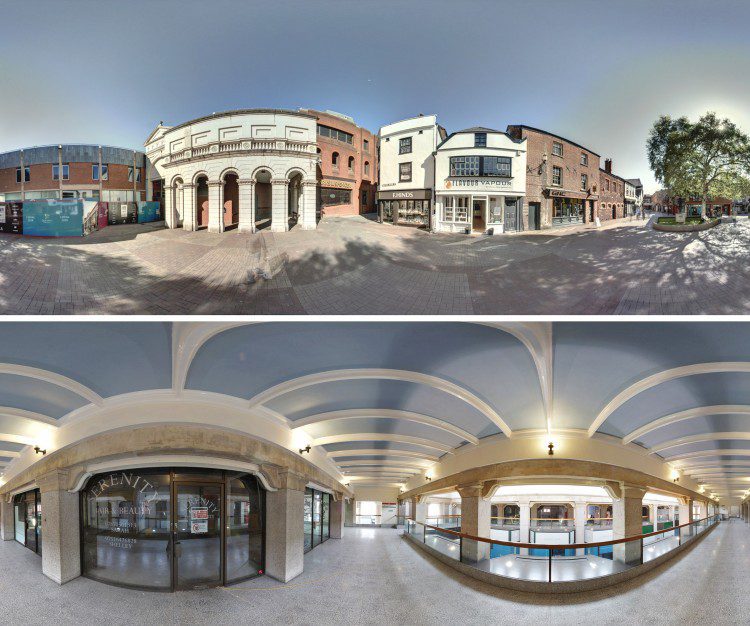 Shepperton Studios, Dec. 3, 2015—360 degree images captured using a SphereVision specialist recording system is helping support the multi million pound redevelopment of Exeter’s Guildhall Shopping Centre. Working alongside Chartered Land Surveyors M J Rees, Arithmetica captured a mixture of both 360 degree panoramic and handheld images, which were then linked with original survey drawings. The combination of traditional and high tech surveys will allow the end client to review and compare the condition of specific areas of the high profile development project, pre- and post-construction.

“Having agreed a project brief with our client, we then approached Arithmetica to discuss the integration of high definition imagery with more traditional survey plans,” commented Sarah Hurley of Bristol based M J Rees. “The inclusion of both 360 degree imagery and handheld stills, registered to the original plans, was seen as crucial to the brief in order to ensure quick and easy navigation of complex drawings, and allow for comparison of the site pre- and post-construction.”

M J Rees was commissioned to survey an area pinpointed for development within the Guildhall Shopping Centre. The area, part of the Grade 2 listed shopping arcade, included former offices and retail units as well as ornate facades and other architectural features, all at ground, first and second floor levels. Working alongside M J Rees, Arithmetica captured more than 100 360 degree panoramic images supplemented with more than 700 high resolution SLR static images. Using SphereVision Project Builder, they delivered an interactive dilapidation record of the site to M J Rees who, using the surveyed position of the camera systems, referenced the high definition imagery to the project drawings and produced a schedule of images for use alongside the plans.

The Guildhall Shopping centre is located in the heart of Exeter’s historic quarter. The £7 million revamp by owners Aviva Investors will see the reintroduction of shop fronts which were blanked out in the 1970s, the creation of terraced seating around the 12th century Saint Pancras Church, as well as additional retail and leisure space, improved walkways and toilets. The plans approved by Exeter City Council were described by Councillors as ‘beautiful architecture’ and ‘a great improvement’.

SphereVision is Europe’s leading brand for spherical and 360 degree video solutions. 360 video systems are able to record a real-world environment in all directions at the same time, capturing every aspect of the scene in one go. When the video is played back – on a laptop, mobile device or over the Internet – viewers can pan around the image, moving through and exploring the site as if they were there. Footage can be integrated with floor and site plans using the company’s innovative software and the high-resolution 360 imagery can also be integrated with online mapping. www.spherevision.com

Arithmetica is an innovator in 360-degree imaging solutions and automated laser scanning data processing software. Located at the world famous Shepperton Studios near London, Arithmetica is the company behind SphereVision and Pointfuse. Arithmetica is an inventive software house that develops ground breaking software solutions to solve real world scientific, medical and engineering problems. Arithmetica builds on more than thirty years of television and film production to develop software for clients around the world. Arithmetica solutions handle complex data rich information and are simple and easy to use.

J. Rees & Company Ltd, formed in 1972, is a privately owned land surveying business regulated by the RICS that works closely with their customers to provide rapid and effective solutions for mapping, measurement or modelling problems. Accreditation to OHSAS 18001, ISO 14001 and ISO 9001 underpins the company’s safe, environmentally responsible, quality service, together with Regulation by RICS and active membership of The Survey Association (TSA).