/ Corporate / VIA Rail Pledges to Take Action on Climate Change

VIA Rail Pledges to Take Action on Climate Change 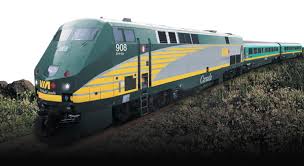 MONTRÉAL, Nov. 30, 2015—VIA Rail Canada (VIA Rail) joined 65 members of the International Union of Railways (UIC), in Paris (France), in committing to take strong action to support international goals (COP 21) to limit climate change by reducing its carbon footprint and supporting a shift toward more sustainable transport. The UIC represents the worldwide community of railway operators and infrastructure managers.

The pledge made by VIA Rail’s President and CEO, Yves Desjardins-Siciliano includes:

“I would like to congratulate VIA Rail for taking the Railway Climate Responsibility Pledge to reduce its carbon footprint and limit climate change,” said the Hon. Marc Garneau, Minister of Transport. “Climate change is increasing pressure to reduce emissions of greenhouse gases and find new transportation technologies that significantly increase efficiency. By reducing the impact of rail transportation on the environment, Via Rail is working to protect our planet and the health of Canadians.”

“In taking this pledge with other leaders of the railway community, we believe that VIA Rail can help bring the transformational change required in Canada and around the world that will ensure continued social progress and economic prosperity by providing a more sustainable travel alternative to cars. VIA Rail can play an instrumental role as a change agent by raising awareness to help mitigate the environmental damage caused by climate change”, said Mr. Desjardins-Siciliano. “VIA Rail has long been promoting the eco-friendly attributes of the train which complement its recognized advantages of accessibility, affordability, safety and comfort.”

VIA Rail continues to implement various initiatives to reduce its environmental footprint. This entails working on many fronts, including energy efficiency with respect to offices and operational facilities, water use, waste management, use of resources and, most importantly, fuel consumption. Knowing that fuel consumption has a large impact on greenhouse gas emissions, significant efforts are being made to improve our fuel efficiency. Through our corporate social responsibility (CSR) strategy, framework and reporting structure, VIA Rail will align its reporting with the best CSR practices and reinforce its commitment to being an open, transparent and accountable corporation.

“VIA Rail’s growth strategy is aimed at providing more frequencies on current routes and adding a more efficient rail corridor dedicated to passenger rail in its major service area between Québec City and Windsor. This approach will increase the relevancy of train services to the communities we serve and ensure that more people choose to ride our trains over using their cars. By doing so, VIA Rail will leverage its considerable assets, reduce its dependency on government funding and help reduce road congestion which in the Montreal, Ottawa, Toronto corridor is costing the Canadian economy close to $10B per year in productivity. Most importantly, the growth of passenger rail will significantly reduce greenhouse gas emissions”, added Mr. Desjardins-Siciliano.

About VIA Rail Canada
As Canada’s national rail passenger service, VIA Rail (viarail.ca) and its 2,500 employees are mandated to provide safe, efficient and economical passenger transportation service, in both official languages of our country. VIA Rail operates intercity, regional and transcontinental trains linking over 400 communities across Canada, and safely transports nearly four million passengers annually. The Corporation was awarded seven Safety Awards by the Railway Association of Canada over the last eight years, and was the recipient of the 2012 Agent’s Choice Award voted by Canadian travel agents and presented by Baxter Travel Media. Since 2007, the Government of Canada has invested almost a billion dollars in VIA Rail. VIA Rail information at a glance: www.viarail.ca/en/about-via-rail