/ Corporate / Into the Future with Robotaxi

Into the Future with Robotaxi 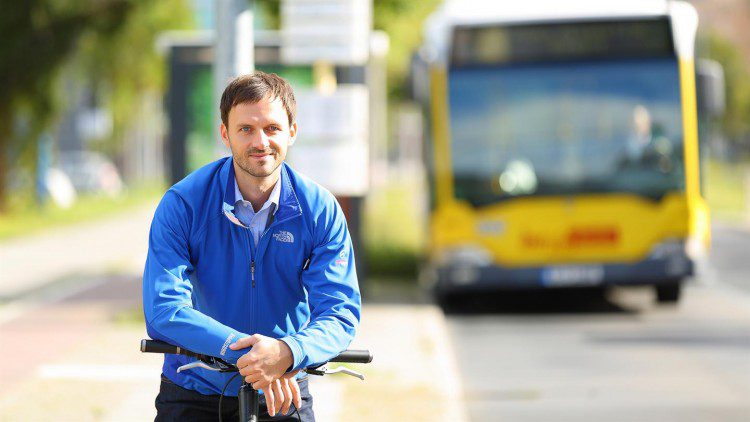 Stefan Trommer knows what kind of person is more likely to drive an electric car, and he is also familiar with the reasons why many people are reluctant to switch to electric mobility. He found this out – together with colleagues – during Germany’s largest user study on electromobility. Trommer himself is a very traditional transport user. He recently sold his motorcycle, so he takes his young daughter to kindergarten by bicycle or in the family car. However, he has his doubts that in the future, his daughter will use a car in the same way that most of us do today – he believes that mobile Internet communication, environmentally friendly driving systems and self-driving cars such as the autonomous Robotaxi will greatly change how people get around in the coming years.

In his work as a transport researcher, Trommer likes to think in terms of networks. He never loses sight of the transport system as a whole or the different transport users and their varying requirements for comfort, speed and cost when travelling from A to B. The geographer’s very first research paper, which he completed in 2008 at the DLR Institute of Transport Research in Berlin, looked into networking the various modes of transport. He worked alongside other scientists on a EU project to develop an intermodal transport planner designed to bring travellers in Europe from door to door. A few years later, the world of research has been eclipsed by reality: “Some areas have progressed as much as we have in our project,” says Trommer, looking back. The world suddenly had iPhones and smartphones, mobile Internet, and plenty of opportunities for developers around the world to design apps for these devices and make them available to a large audience – all the ideas that were born within the research projects were suddenly faster and had found more users than the researchers had originally assumed. But he warns: “Unfortunately, no matter how well these apps work in major cities – or even nationwide – they are not yet reliable at a European level.”

“We are at home wherever we are”

Although Trommer has conducted research into the ‘future of mobility’ for some time now, he remains fascinated by the opportunities that mobile transport planners will offer: “The mobile transport planners mean that we will need to prepare less before travelling. All one needs to do is work out what transport to take upon arriving at the destination.” Nevertheless, he remains unconvinced that we will actually save time. Instead, he believes that the effect is different: “Today, we have access to information that was previously only available in the books used by the transport operators. In many cases, the information is not even listed in the schedules and instead provides real-time data, including traffic disruptions. It gives us immense self-confidence and a feeling that we are at home wherever we are.”

But not all of the outlooks envisaged by the transport researchers a few years ago have actually been fulfilled – far fewer transport users than the researchers had hoped have switched from road to rail. “At the end of the day, we will still be taking the same urban railway. It could be that this kind of app will change my behaviour from time to time, but few people are going to leave their cars behind and start taking the train on a permanent basis simply because the quality of the information is better and it is more accessible,” explains the transport researcher.

Trommer grew up in East Berlin. He turned 10 shortly before the Fall of the Berlin Wall, and enjoyed biking around far more than his parents would have wanted him to: “Once I went a bit overboard and cycled from my home in Marzahn on the edge of the city to visit friends in Prenzelberg in the Mitte district,” he says with a smile. And although the journey was not particularly dangerous in Berlin back then, it would be almost inconceivable for a 10-year-old to repeat the same route today. Trommer feels melancholy when thinking of the fairly empty roads and the space that a child growing up in the east of the city could enjoy back then. Since the reunification, the number of cars registered per thousand inhabitants has risen from 200 to 340 – without counting company cars and hired vehicles. As a result, it can be quite precarious for cyclists and pedestrians, especially in the city centre. “Everyone wants to ride a bicycle today, and even the large distances in Berlin can be managed using an electric bicycle or a pedelec. And everyone should be able to choose their preferred mode of transport. Nevertheless, cities can influence the choice, for instance by constructing a better network of cycle paths or by supporting (electric) car sharing.”

The researcher is fully aware that people are reluctant to change their mobility patterns – unless they can see a clear personal benefit. And that is the crux of the matter when it comes to electromobility. Buyers of electric cars do not really enjoy any benefits, apart from a clear environmental conscience – the vehicles are costly and do not have the same range as cars with combustion engines. It is not yet possible to fill up on ‘electric fuel’ anywhere. The factors that currently prompt people to purchase an electric car include technical inclination and a distinct environmental awareness. Trommer is extremely familiar with the typical users of electric vehicles – the Institute of Transport Research interviewed 3111 drivers as part of the major user study on electromobility. They found that the average driver of this type of vehicle is male, usually educated to a high degree, and is generally in a higher income bracket. Here, the average age is 51 – slightly higher than that of buyers of conventional new cars.

Despite all the obstacles, Trommer is certain that electromobility will gain popularity – bit by bit. Like other researchers, he assumes that the commercial sector will initially ensure market penetration: “Couriers, nursing services and many company cars do not travel more than 100 kilometres per day, and can easily be connected to a power outlet in the evening. This will create a critical mass, allowing the price of vehicles to fall, which will make them more interesting for private individuals, or available on the second-hand car market. “Besides the low carbon footprint, more people are drawn to purchasing electric cars because they enjoy their rapid acceleration. And why not, if it works?” says Trommer with a grin. “Nevertheless, the vehicles will have to become more affordable. There is no way around that.”

The work conducted by the researchers at the Institute of Traffic Research is taking them ever further into the future and they are now finding out what our transport system would look like if we were to be driven around in autonomous Robotaxis. “That will certainly change the way we think about mobility,” says Trommer. “Perhaps we will not even drive our own children to school or kindergarten; instead, they will be taken back and forth by a Robotaxi.” The researcher took part in a user study organised by the Institute for Mobility Research within the BMW Group, in which he and his colleagues conducted interviews in China, the United States and Germany to assess the influence of autonomous technologies on our individual mobility. Trommer believes that autonomous driving will have a tremendous impact on our transport systems: “It is different to introducing electromobility, which only involves replacing the drive system. The concept is entirely new and does not have much to do with what we see around us today. The term ‘disruptive technologies’ is currently overused, but in this case, it is most likely altogether accurate.”

Cars that take us to our destinations autonomously and that provide an Internet connection will allow us to work during the journey. Trommer can imagine that “perhaps some of us will be able to count commuting time as working hours – someday.” Changes like this can bring ripple effects – for instance, to settlement structures. “In future, it is conceivable that the time it takes us to get to work will be less important and we will once again be drawn to countryside living, where the cost of housing is also lower. What effect will this have on the local public transport system as we know it today?” Many questions remain unanswered for now, but the discussions must continue: “This is the only way for cities to take the right steps and to control the introduction of new technologies to ensure the greatest possible benefits. Politicians need to be informed in order to make decisions on how to handle any transformations that may be on our doorstep.”

Safety instead of alloy rims

Stefan Trommer still misses his motorcycle and hopes to get back into the saddle once his children are older. Now, however, safety and flexibility are more important for his personal mobility – and he would be happy to pay a supplement for an assistant who could occasionally take the wheel: “If I knew that this technology will provide safety for my family, it would certainly be a more sensible car accessory than leather seats, alloy rims, or an auxiliary heating system for the mere handful of really cold winter days.”