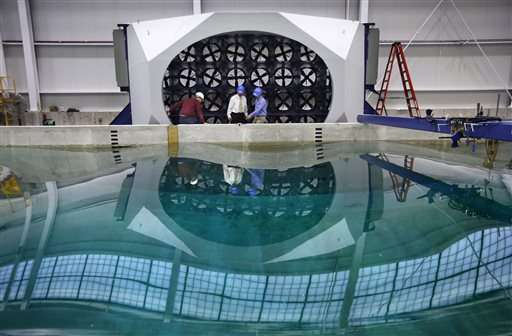 Builders of everything from cruise ships and ports to oil rigs offshore wind turbines are tasked with the same question—will their work will be strong enough to stand up to the sea?

A miniature indoor ocean at the University of Maine could make for a lot less guessing.

The school’s Advanced Structures and Composites Center is ready to unveil a $13.8 million expansion that director Habib Dagher said will simulate a stormy ocean to help innovators find out if their creations can withstand the sea’s fury.

The indoor facility, six years in the making, will be able to simulate waves over 100 feet tall and winds of more than 200 mph on scale models to test products, Dagher said. The university will unveil the facility, the centerpiece of which is a 100-foot pool that uses 32 fans and 16 paddles to generate wind and waves, at a Monday ceremony.

The W2 Ocean Engineering Laboratory will test the strength and seaworthiness of structures such as boats; offshore wind, tidal and wave energy facilities; aquaculture ventures; oil and gas equipment and critical infrastructure such as ports and bridges, Dagher said.

It will also be able to use models of coastal cities—Dagher mentions possibilities like Portland, Maine, and New York City—to simulate how they will be impacted by sea level rise, he said. That will help test potential protective measures for those cities, he said.

The facility is already attracting interest from builders, as workers were testing a model of a facility that would harness energy from waves. A half-dozen businesses have lined up to use it over the next few weeks, Dagher said.

“We’re already getting calls from a lot of wind energy folks. There’s no facility that can do this right now,” said Anthony Viselli, the manager of the facility and project manager of its equipment’s construction.

Dozens of representatives from Maine industry plan to attend Monday’s unveiling, including Peter Vigue, chairman and CEO of Cianbro Companies, which oversaw the construction of the building. He said the facility is important for luring offshore business to Maine.

“Technology like this will be of significant value going forward in attracting other companies to our state that are in that industry,” he said.

The simulated ocean at the university’s campus in Orono was funded by a combination of public and private grants, Dagher said.