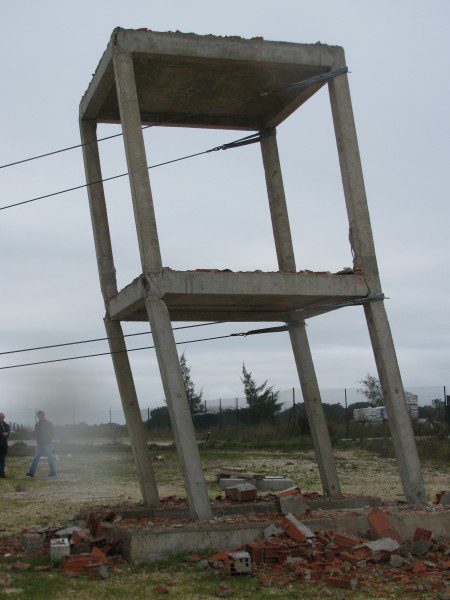 The first tests on full-scale three-dimensional recycled concrete structures open possibilities to the incorporation of this eco-friendly material.

Recycled aggregates are made of crushed stone and attached mortar. This mortar has high deformability, water absorption, and roughness properties that have to be considered when designing concrete mixes. This change of properties draws suspicions from the construction agents towards recycled aggregates incorporation. These suspicions are a hindrance towards a large-scale use of this eco-friendly material, despite the increasing scientific knowledge regarding this material showing its applicability. In this context, the objective of the research project conducted at IST was to evaluate if the incorporation of recycled aggregates only had to be considered at the material and mechanical level of if the structural performance was affected in a way that this change in material and mechanical properties would not represent accurately. If the changes in behavior were predicted solely due to the commonly tested material and mechanical properties, a huge boost in confidence could be generated from this investigation since most of the studies on recycled concrete are in respect of these kind of parameters. In recent years, some experiments have been made in structural elements and scaled-down two-dimensional frame structures. The innovative aspects of the tests conducted by the research team of IST (full-scale testing of three-dimensional structures) not only have an added impact due to the magnitude of the experimental campaign per se, but also address the possible occurrence of phenomena that scaled-down specimens would disregard due to scale effects. Additionally, this was the first monotonic destructive test, an experimental technique used to assess seismic behavior, made on recycled concrete structures.

The behavior of the structures was adequately predicted: the consideration of the effect of recycled aggregate incorporation on the material and mechanical properties was enough to predict the structural response and the design standards provided a seismic-resistant structural solution. A fundamental aspect in the seismic response of a structure is its deformation capacity, which was not only adequate, complying with international standards, but also predicted by design calculations and independent of recycled aggregate incorporation. These destructive tests and other studies made on the same experimental campaign imply that, from a structural point-of-view, the construction sector can have confidence in the use of this material.

The research project included not only the seismic behavior experiments, but also dynamic characterization and vertical load tests on the structures. Other material and mechanical tests were made on the structures, as well as on specimens produced in the laboratory facilities at IST. The mechanical and durability long-term behavior of the recycled concrete structures was analyzed and it was concluded that the use of high quality recycled products on concrete is no hindrance to a good performance. A research of this magnitude could not be possible without partnerships: Opway, a construction company, FCT (the Portuguese Foundation for Science and Technology) and the Portuguese Programme for Research and Development Associated with Public Contracts, were the sponsors that made these experiments possible.