Researchers at The Pennsylvania State University developed a new type of symmetry operation that will lead to new advanced materials, including tougher steels. The technique has a direct impact on computational materials design by reducing the number of measurements.

In crystals, atoms are arranged in symmetrical patterns, like a cube of salt or crystal of sugar or quartz. Symmetry groups tell scientists how many different ways atoms can arrange in repeating patterns. If they know which symmetry group a material falls into, they already know a lot about the properties (e.g., mechanical, thermal, electrical, etc.).

There are precisely 230 symmetry groups that explain how atoms can be arranged in space. Another symmetry operation called time reversal states that if time runs backward a material will either look the same or it won’t. Time reversal introduces an additional 1,421 new symmetry boxes.

“Nature always takes the path of least resistance,” says the paper’s coauthor Brian VanLeeuwen. “Knowing this path allows us to calculate tremendously important materials properties. These properties are critical to the function of a very wide range of technologies, from making it possible for an ultrasound to detect a life-threatening heart condition to preventing nuclear reactors from melting down.”

With this research, scientists looking for a certain material property can look only at materials in the appropriate symmetry box, greatly speeding research.

Read more about this research at bit.ly/215OVNg 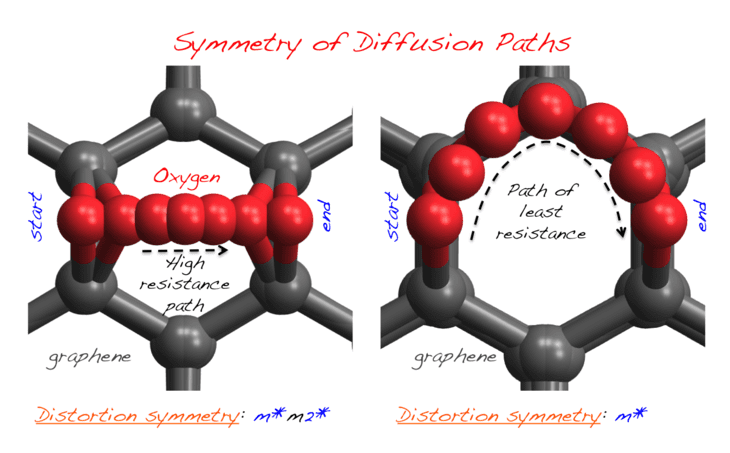 Each diffusion path for an oxygen atom (red) moving across a graphene ring composed of carbon atoms (gray) is considered a “distortion” and indexed by a unique “distortion symmetry group” indicated below each image. The symmetry group contains all essential information about the properties of the material system as the diffusion occurs, including the ability to help determine the minimum energy pathway. In this case, the minimum energy pathway is when oxygen moves around the ring (right image) rather than across it (left image).

A new research paper, “Accelerating Low-Carbon Development in the World’s Cities,” details investments that the world’s cities could make to dramatically reduce carbon output. The report is part of a 10-paper series in support of the Global Commission on the Economy and Climate, with a focus on changes that could make an impact.

The paper outlines the infrastructure investments to take cities on a lower-carbon path, suggesting that policy and financing changes are needed to accelerate this investment in today’s low energy-price environment.

The research suggests that the high global cost of $977 billion per year for these investments from 2015-2050 would pay off in 16 years given the reduced annual energy expenditure. It also considers a range of different energy prices that would impact the cost of the necessary investments for waste, transport and buildings upgrades.

Read the full report at bit.ly/1X0X1Cf. 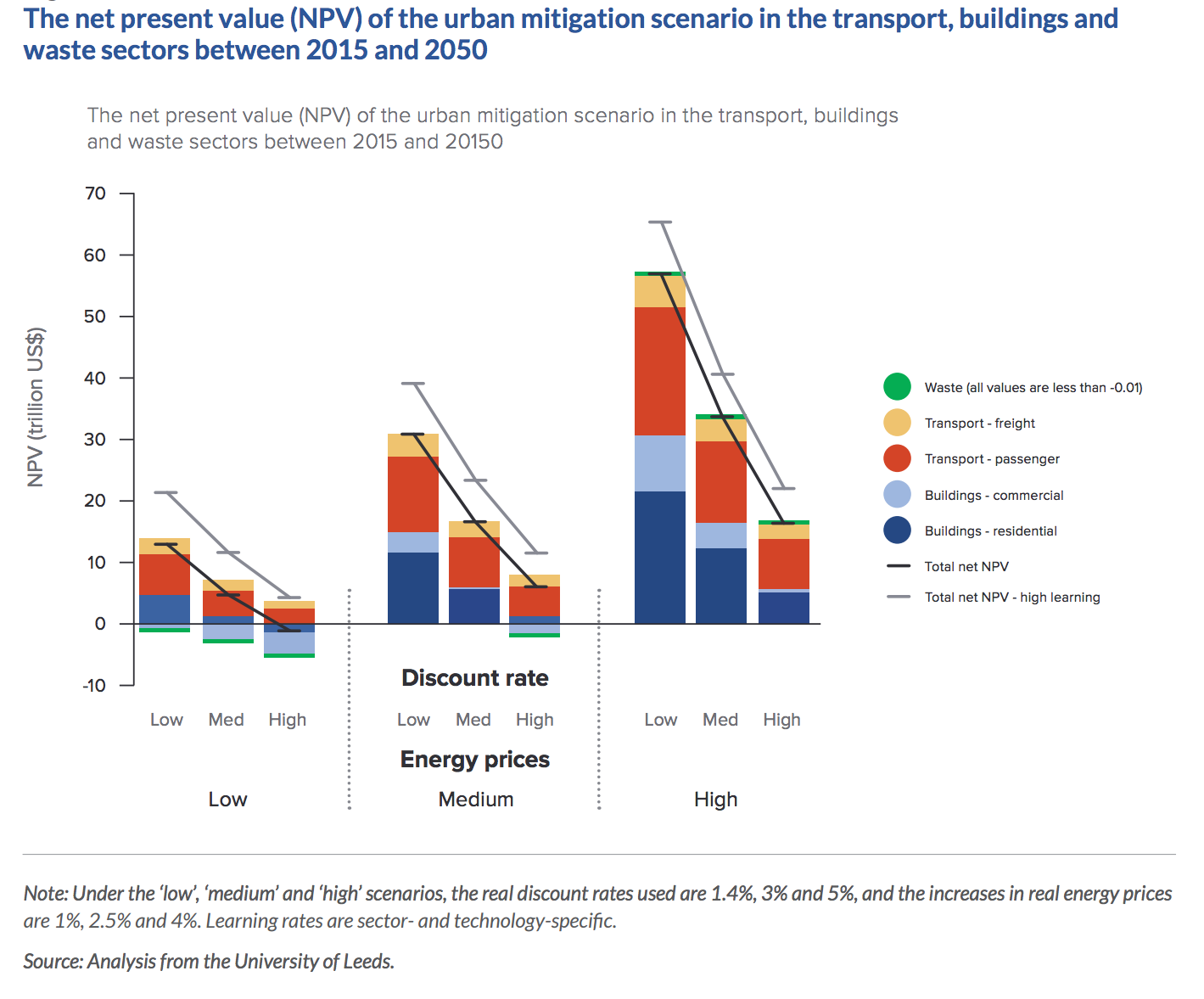 A new national survey of public-transportation ridership by HNTB Corp. found that cost-effectiveness and increased productivity were the leading reasons to choose public transportation over driving.

Among the developments impacting ridership are more public-transportation stations close to where people live, shop and go for entertainment and culture. Four in five people (80 percent) say they would be motivated to ride even more if there were the following:

Many factors play into increased public-transportation ridership in the United States. (Source: HNTB)

GE researchers, working with a new U.S. Department of Energy program, have engineered a steam turbine that compresses a stream of saltwater in a hyper-cooling loop that naturally separates salt in a solid form, leaving just freshwater ice.

“97.5 percent of the Earth’s water supply is virtually inaccessible because water desalination is still too expensive and difficult to deploy at a large scale,” noted Vitali Lissianski, a chemical engineer and project leader at GE Global Research’s Energy Systems Lab. “Freezing seawater to treat it is nothing new, but the way we are doing it is very different.”

The engineering advancement lies in technology to condense the liquids to freezing solids. Cooling the salt water to separate salt and water is done via expanding cold gas in the turbine. The process is much more efficient than conventional thermal desalination systems, and thus more accessible. 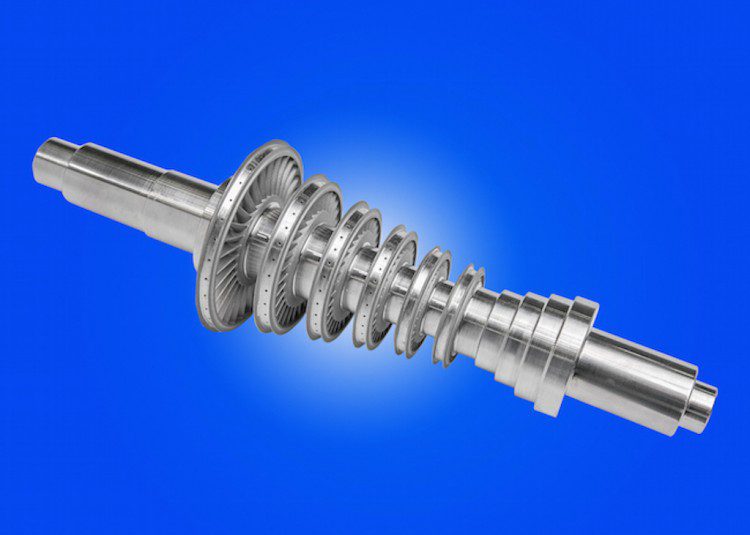 Slow and Modest Growth for Construction

The construction recovery is expected to continue an upward trajectory in 2016 with a 6-7 percent increase, according to reports by Dodge Analytics, FMI and the Portland Cement Association (PCA).

Dodge (www.construction.com) predicts a nearly 9 percent increase in the dollar value of non-residential construction building starts in 2016, following a flat 2015. The report indicates that the largest annual increase in this sector will be 14 percent for office-building work, and 11 percent for stores and shopping centers.

FMI (www.fminet.com) sees an overall economic growth fueled in part by the lowest gasoline prices in five years. Its estimate of 6 percent construction growth details pent-up housing demand and an overall market of $1.09 trillion, the highest level since 2008.

The combined outlooks, and the varying sectors driving the improvement, are welcome news for a recovering construction sector worldwide.

A research paper from NASA’s Jet Propulsion Laboratory, recently published in AGU’s online journal Earth and Space Sciences, predicts a 99.9 percent likelihood of a major earthquake near Los Angeles within the next three years. This conclusion was inferred from research into the 2014 La Habra earthquake. The report has gained widespread distribution and has prompted a statement from the U.S. Geological Survey that cautions that scientific rigor is not present in the report and that findings have not been examined by long-established committees that evaluate earthquake forecasts and predictions.

A statement from the U.S. Geological Survey reads in part, “The earthquake rate implied by the 99.9% probability is significantly higher than observed at any time previously in Southern California, and the lack of details on the method of analysis makes a critical assessment of this approach very difficult. Therefore, the USGS does not consider the analysis presented in this paper a reason to change our assessment of the hazard.”

The probability used by the USGS for such a magnitude 5 or greater earthquake in this area over the next three years is 85 percent.

Llloyd’s Register Foundation, the leading U.K. engineering charity, has begun a review of resilience engineering. The in-depth look at how systems withstand, respond and adapt to disruptive events will have a global scope.

“We have only to examine recent events such as Hurricane Sandy in the New York area to understand the complexity of the challenges that lie ahead,” said Michael Bruno, Dean of Schaefer School of Engineering and Science at Stevens Institute of Technology and author of the review. “Cascading failures in the transportation, healthcare and energy sectors during that event demonstrated the need to develop trans-disciplinary solution pathways that can ultimately enable ‘resiliency by design’.”

Areas of focus include:

The foundation has a history of such reviews leading to large research grants. Two prior reviews include a big data focus and nanotechnology. The Foundation launched a review of structural integrity and systems performance in Singapore recently. This latest effort on resilience is hoped to spur research investment makes a real difference in improving the safety of the critical infrastructure on which modern society relies. 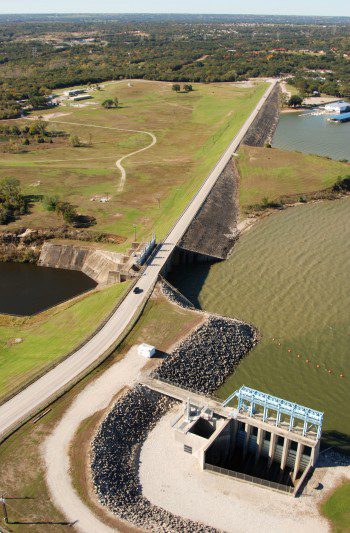 The Eagle Mountain Lake dam is one of many in North Texas that has experienced an increase in seismic activity that it was not designed for.

Researchers in the University of Texas Arlington’s College of Engineering are conducting a three-year, $1 million seismic safety project to analyze data from the Eagle Mountain Lake dam. The project is being funded by the Tarrant Regional Water District (TRWD) to understand any impact to the dam given increased earthquake activity.

“Dams in this region were not designed to withstand seismic events, so we want to be able to test them to determine if they are in danger of failing,” said Anand Puppala, a professor of civil engineering and associate dean for research in UT Arlington’s College of Engineering.

The team will key in on the indicators of liquefaction, dynamic slope stability and lateral spreading. Geostatistics with spatial correlation analysis will be used to create a model of the entire dam. Soil properties around the dam will be used to identify which layers are subject to failure.

“This project is part of an ongoing evaluation of our infrastructure,” says Louie Verreault, a dam and levee safety engineer for the TRWD. “It’s important to have an understanding of what damage may result from not only a high-magnitude earthquake, but from smaller ones as well.”

The researchers will develop a comprehensive, reliability-based framework that can be used to detect seismic damage of North Texas dams and beyond.

Comments are disabled
NEXT ARTICLE
Managing the Model: You Live in the Future, Why Don’t You Work There?
November 21, 2015
PREVIOUS ARTICLE
Oversite: Visualizing the Difference
November 21, 2015