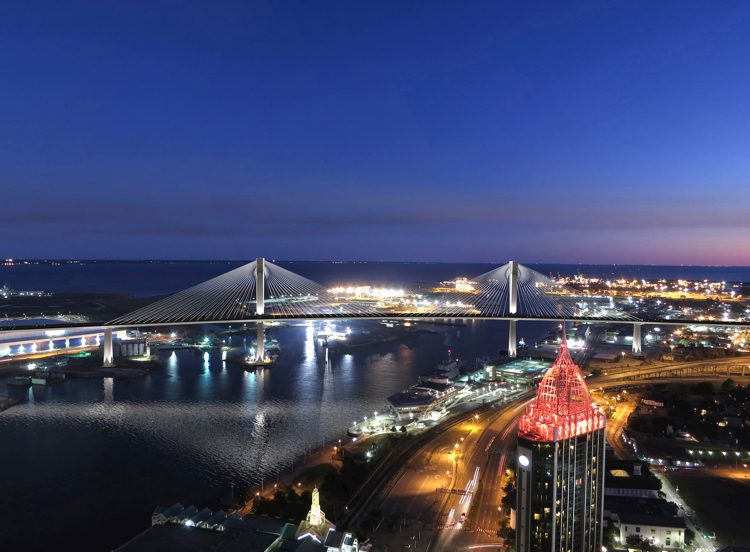 Length: Bridge at approx. 2.75 miles and 9.25 miles of causeway widening

Interstate 10 (I-10) is the United States’ southernmost transcontinental highway, extending 2,500 miles from Jacksonville, Fla., in the east to Santa Monica, Calif., in the west. This highway has seen steady increases in traffic volumes, and the George C. Wallace Tunnel on I-10 in downtown Mobile, Ala., has created a notorious bottleneck given its age and configuration.

The tunnel was constructed in 1973 for a traffic flow of 36,000 vehicles per day, but it now sees an average of 73,000 vehicles per day, with peaks as high as 100,000 on holidays and in the summer months. Compounding the issue of volume is the fact that there are more than four lanes each way that get constricted down to two lanes each way through the tunnel, with a hairpin turn that reduces traffic to 25 miles per hour. The narrow tunnels have no shoulders, which means hazardous vehicles can’t travel through, instead having to take an hour-long detour to the north. This all adds up to severe traffic buildup and inefficiency that begs a 21st-century solution.

To solve this issue, the Alabama Department of Transportation (ALDOT) proposed the I-10 Mobile River Bridge and Bayway Project, which will replace the tunnels with a six-lane bridge and causeway widening to expand the existing four lanes to eight.

“There has been a lot of negative feedback from the public and stakeholders in Mobile, so we were tasked with creating a visualization of the project,” says J.D. D’Arville, GIS/LRS data management administrator at ALDOT as well as visualization manager for this project.

The visualization team created a 3D conceptual model of the entire proposed project with realistic renderings and animations of the driving experience as well as a 360-degree flyover to provide context from all angles around the city.

Goals for the visualization were many, including the following:

To realistically render the project in context, a lot of data gathering was undertaken. Aerial LiDAR was flown for the full 10 square miles of the project along with aerial orthophotography and more than 600 perspective images via helicopter from 600 and 1,500 feet. Design alignments (with seven proposed routes whittled down to one prior to animation) and plans also were collected.

The next step involved placing designs and photographs to present the conceptual design in context with current reality.

“We used LumenRT (now owned by Bentley Systems) for the Live cube,” says Zac Cooper, civil engineering graduate and acting virtual design and visualization manager. “It’s an incredible and simple software that can create an immersive realistic 3D environment. This software makes it easy for the general public to understand what exactly is taking place within a project.”

The team also got creative in presentation efforts and methods employed to show how the bridge could provide a dramatic city transformation.

“Zac went up in the super structure of of the RSA building, the highest building in downtown, and took some night images,” says D’Arville. “We photo-matched the bridge at night and lit the bridge up in white and LED blue. And since Mobile is the original home of Mardi Gras, we lit it up in Mardi Gras colors, too. That was to give the public the idea that it doesn’t have to be an eyesore; it can be a showcase or gateway to the City of Mobile.” 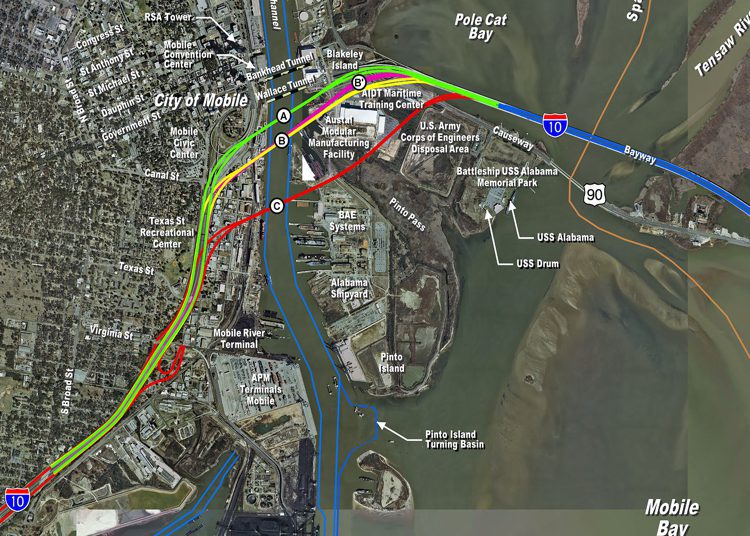 Many different alignments were tested and vetted prior to picking the “B-Prime” configuration.

“Our first attempt for the driving animation estimated a completion time of 47 days running 24/7 on one computer,” says Cooper. “For our second attempt, we used six Blade servers, and that was estimated at 29 days. Our third attempt was using two Exchange servers, and it was estimated for completion in 20 days. For the fourth attempt, we created a new render farm using five HP Z820 workstations customized and configured for rendering and animation, and one server with all computers, data and resources pointing to that server on one switch, creating its own local network that was optimized for speed. We started with 47 days and knocked it down to seven days.”

The process to achieve a workable rendering configuration took the team nearly a year of trial and error.

“We spent some long days and nights completing this project, but in the end we achieved our goal and created an accurate portrayal of the project,” notes D’Arville. “When you set up an animation to run, and you leave at five o’clock and come in the next morning and something blows up or is not right, you can’t just pick up where you left off. You have to start it all over because of the way it’s set up.” 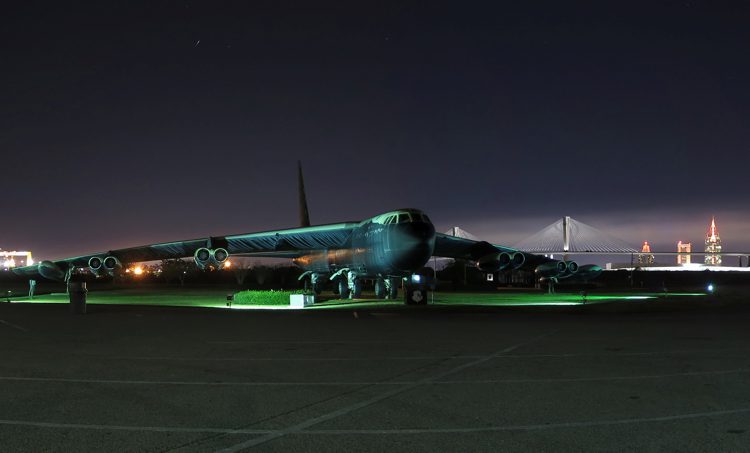 This view looking west toward downtown Mobile from Battlefield Park, which showcases the U.S.S. Alabama .

Proving to the Public

After the animation was complete and many different photo-matched visualizations were output, it was time to share the model, images and animations with the public. The public-involvement meeting had three stations: 1) a PowerPoint presentation that looped images of photo matches and animation, 2) static still-art images and 3) a Live Cube station for sharing the model in any virtual perspective attendees wished to see.

“Given the number of people in line at the Live Cube station, I’d say it ‘hit it out of the park’ for us,” adds D’Arville. “When you can take someone to their house to show them what the bridge is going to look like, it’s pretty mind boggling for them.”

Along with the ability to showcase a view for each individual, ALDOT commissioned a study from the USA Center for Real Estate & Economic Development to assess the economic impact.

The study found that “the new roadway will promote economic development for coastal Alabama and the Southern U.S. economy by reducing congestion, creating jobs, stimulating retail sales, promoting home sales and construction, and improving tax revenues for municipal budgets.” The estimated impact ranges from $537 million to $1.08 billion per year, with 64 percent of those benefits coming from reduced congestion.

The presentation and public dialog was a positive experience that seemed to turn the tide on prior objections.

“The feedback we got at the meeting and afterwards was amazing,” adds D’Arville. “One TV station wanted to know who produced the animation, and we were proud to let them know that we produced it at ALDOT.” 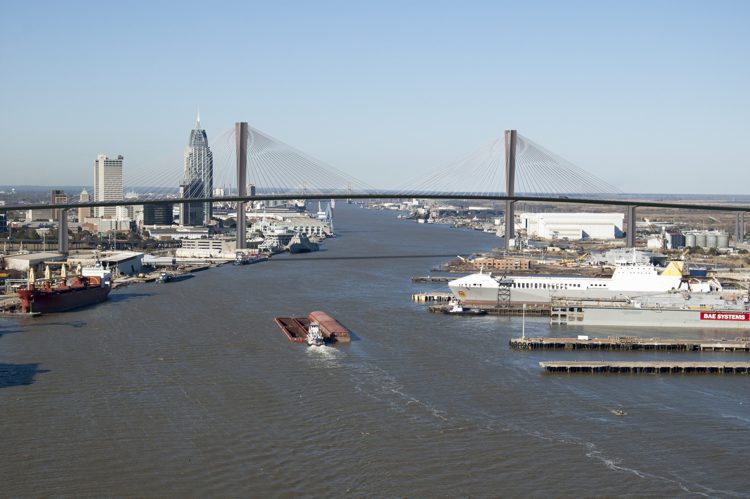 The bridge will have 215 feet of air-draft clearance to accommodate container ships that use this deepwater port, the fourth largest by tonnage in the nation. The port has direct access to 1,500 miles of inland and intracoastal waterways.

In July 2015, Thompson Engineering was selected as the design team to develop plans for the I-10 Mobile River Bridge and Bayway Project. The contract was “fast tracked” so the project can move as quickly as possible, allowing for preliminary design work to commence immediately before the full contract is finalized.

The preliminary design is an important step toward finalizing the Environmental Impact Statement. Additional steps are underway to investigate issues that will impact the final design, including exploratory drilling along the route to provide rock and fluid samples that will help determine the precise placement and engineering for bridge piers.

Mayors from the region visited Washington, D.C., to lobby for funding for the proposal. The Alabama legislature also is working on funding, which could include a public-private partnership and tolling.

“As far as time to completion, the last that I heard was six to eight years,” notes D’Arville. “I think this project is going to be high on the priority list. They’ll figure out a way to get the project funded and built.”

A combination of software was used to visualize this large-scale and complex project, including the following: