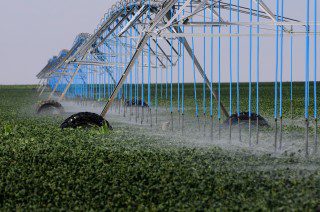 MANHATTAN, KANSAS — A new Kansas State University study finds that the over-tapping of the High Plains Aquifer’s groundwater beyond the aquifer’s recharge rate peaked in 2006. Its use is projected to decrease by roughly 50 percent in the next 100 years.

David Steward, professor of civil engineering, and Andrew Allen, civil engineering doctoral student, Manhattan, published those findings in the recent Agricultural Water Management study “Peak groundwater depletion in the High Plains Aquifer, projects from 1930 to 2110.” It is the first paper to look at and quantify peak aquifer depletion.

Researchers looked at the historic and projected future groundwater use rates of the eight states comprising the High Plains Aquifer. The aquifer runs under South Dakota, Wyoming, Nebraska, Colorado, Kansas, Oklahoma, New Mexico and Texas — eight agriculturally important states. It provides 30 percent of the irrigated water for the nation’s agriculture and is pivotal in food production.

This latest study builds on the 2013 Proceedings of the National Academy of Sciences study in which Steward and colleagues forecasted the future of the Ogallala Aquifer in Kansas. Researchers expanded their projections to include wells in Kansas that were both depleted and steady in their historic groundwater levels as well as the eight states that rely on the High Plains Aquifer. A total of 3,200 Kansas wells and 11,000 wells from the other seven states were studied to understand their water depletion processes.

Allen wrote the computer code necessary to analyze massive amounts of geographic information systems data about the more than 14,000 wells using the aquifer. A logistic equation was developed to apply more than 300,000 well measurements to create a historical record of its water level and also its projected water level through 2110.

“When we did the Kansas study, it really focused on those wells in Kansas that were depleting,” Steward said. “We came up with a set of projections that looked at how long the water would last and how the depletion process would play out over time. With this study, we wanted to learn how the depletion in various locations plays into a larger picture of the aquifer.”

Steward and Allen found that the High Plains Aquifer’s depletion followed a south to north progression, with its depletion peaking in 2006 for the entire High Plains Aquifer. Overall, researchers saw that some portions of the aquifer are depleting while others are not. Texas peaked in 1999, New Mexico in 2002, Kansas in 2010, Oklahoma in 2012 and Colorado is projected to peak in 2023. Nebraska, South Dakota and Wyoming are not projected to reach peaks before 2110.

“We are on a declining trend right now for water use in irrigated agriculture,” Steward said. “As we project what happens in the future following the existing water use patterns, the amount of depletion and the amount of water that comes out of the aquifer will decrease by about half over the next 100 years.”

Additionally, researchers saw that the water depletion rates for each state in the High Plains Aquifer follow a similar bell-shaped curve pattern as the one for oil depletion in the U.S. modeled by the Hubbert peak theory.

While water is a finite resource, Steward said the intent behind the study is not raise alarm, but rather encourage proactivity to manage and preserve this resource.

“This study helps add to the dialogue of how is it that we manage water and the effects of the choices that we make today,” Steward said. “It has the same kind of message of our previous paper, which is that our future is not set; it’s not cast. The projections we show are projections based on the data we have available that show the trends based on how we used water. People have the opportunities to make choices about the way that things are done, and the findings from this study help add to the dialogue.”

The National Science Foundation and the U.S. Department of Agriculture funded the study. The U.S. Geological Survey and the Kansas Geological Survey contributed decades of information about the High Plains Aquifer and the Ogallala Aquifer for analysis.