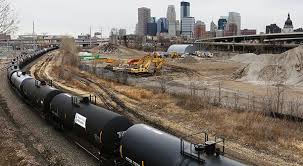 Willmar, Minn. – Federal Railroad Administrator Sarah Feinberg today announced that the U.S. Department of Transportation will provide $10 million for the Willmar Rail Connector and Industrial Access project in Willmar, Minn. The project is one of 39 federally funded transportation projects in 34 states selected to receive a total of nearly $500 million under the Department’s Transportation Investment Generating Economic Recovery (TIGER) 2015 program. U.S. Transportation Secretary Anthony Foxx announced project selections for this round of TIGER grants on October 29.

The Department received 627 eligible applications from 50 states and several U.S. territories, including Tribal governments, requesting 20 times the $500 million available for the program, or $10.1 billion for needed transportation projects.

“Transportation is always about the future. If we’re just fixing today’s problems, we’ll fall further and further behind. We already know that a growing population and increasing freight traffic will require our system to do more,” said Secretary Foxx. “In this round of TIGER, we selected projects that focus on where the country’s transportation infrastructure needs to be in the future; ever safer, ever more innovative, and ever more targeted to open the floodgates of opportunity across America.”

This TIGER grant will support construction of a direct connection between the Marshall and Morris Subdivisions of the BNSF rail network eliminating the need for seven to 10 trains daily to pull into the railyard in downtown Willmar. The project also includes a new railroad spur west of Willmar, providing rail access to the city’s industrial park. The project is the last element of a long-standing local effort to improve the quality of life of Willmar residents and open up opportunities for economic growth. The funding provided today, as well as the release earlier this month of the draft National Freight Strategic Plan available here, demonstrates the Obama Administration’s commitment to increasing and improving the movement of freight, while reducing costs and increasing economic competitiveness.

Currently trains moving north-south on the rail network must pull into the Willmar yard, reverse direction, and reposition locomotives and crews. In the process, trains create excess emissions and noise, block crossings, impede the flow of traffic in Willmar, and consume yard and mainline capacity. This project will address these problems and enhance qualify of life by reducing train traffic in downtown Willmar. This investment also creates both rail capacity and operational flexibility, and enhances the efficiency of the rail network.

With this latest round of funding, TIGER continues to invest in transformative projects that will provide significant and measurable improvements over existing conditions. The awards recognize projects nationwide that will advance key transportation goals such as safety, innovation, and opportunity.

“Blocked crossings are a significant safety concern – and one we hear about frequently from the communities affected,” said Administrator Feinberg. “This grant will build the infrastructure necessary to move train traffic out of downtown and reduce blocked crossings that threaten the safety of the people who live and work in this community.”

This is the seventh TIGER round since 2009, bringing the total grant amount to $4.6 billion provided to 381 projects in all 50 states, the District of Columbia, and Puerto Rico, including 134 projects to support rural and tribal communities. Demand for the program has been overwhelming; to date, the Department of Transportation has received more than 6,700 applications requesting more than $134 billion for transportation projects across the country.