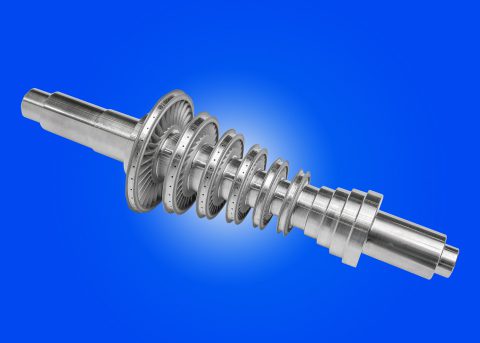 NISKAYUNA, N.Y.—It turns out that power generation and water desalination may have a lot in common. That’s what GE researchers at GE’s Global Research Center in Upstate New York are aiming to find out as part of a new program with the US Department of Energy (DOE).

In power plants, steam turbines use pressurized steam to spin their rotating parts and power generators to produce electricity. GE is a world leader in the development and application of steam turbine technology, with more than 530 GW of steam turbine capacity from more than 6,000 installed units. We’ve been making steam turbines since the company’s early days with Thomas Edison.

As part of the water desalination technology being developed with the DOE, researchers are using the same steam turbine turbomachinery 3D printed in a miniaturized form to compress and stream a mixture of air, salt and water through a hyper-cooling loop that freezes seawater. By freezing the mixture, the salt naturally separates in solid form, leaving just the ice. The ice is then melted, leaving clean water.

“97.5% of the earth’s water supply is virtually inaccessible because water desalination is still too expensive and difficult to deploy at a large scale. By putting desalination ‘on ice,’ we hope to change that dynamic,” said Vitali Lissianski, a chemical engineer and project leader at GE Global Research’s Energy Systems Lab. “Freezing seawater to treat it is nothing new, but the way we are doing it is very different. We’re tapping into our wealth of technical knowledge in turbomachinery to devise a cost-effective solution.”

“You might say we’re turbo charging our way to an affordable water desalination system,” Lissianski added.

Hofer explained that in a low-pressure steam turbine, water vapor (steam) condenses to liquid water. For the new desalination process, GE team is extending that idea to freeze liquid salt water into solid ice and salt crystals during its expansion through the turbine. This extension from condensing liquids to freezing solids requires new and innovative solutions to address several challenges of this new turbine application.

Hofer added, “Cooling the salty water, or brine droplets, by expanding cold gas in the turbine would greatly reduce the energy required for desalination. The heat transfer between the cooling gas and brine would be much more efficient compared to conventional thermal desalination systems.”

Lissianski added, “Support from US DOE is critical to the success of the technology development. Through our program with the DOE, we will test the feasibility of a low cost water desalination system that is driven by our steam turbine parts and technical know-how. If it works, the process we are developing could reduce the cost of desalination by 20% versus more conventional thermal evaporation approaches.”

Steam turbines are not the only technology GE researchers are pulling off the “GE Store” shelf to test out the new concept in water desalination. They have pulled in other items as well, including 3D printing technologies.

For the water desalination concept, using a full size steam turbine would not make sense. They are typically the size of several rail cars and take months to manufacture. What researchers have done is essentially shrink the components into a usable size for their experiments. To speed the development process, the miniaturized parts were 3D printed using technologies developed in GE Global Research’s Additive Manufacturing Lab and GE Aviation’s additive manufacturing facility in Cincinnati, Ohio. To perform the actual water treatment processes, GE researchers have drawn from our technical expertise at the lab and in the water business.

The program with the DOE is underway and lasts through mid-summer of next year. The end goal is to demonstrate the feasibility of this new concept in water desalination.

GE Global Research is the hub of technology development for all of GE’s businesses. Our scientists and engineers redefine what’s possible, drive growth for our businesses, and find answers to some of the world’s toughest problems. We innovate 24 hours a day, with sites in Niskayuna, New York; San Ramon, California; Detroit, Michigan; Bangalore, India; Shanghai, China; Munich, Germany; and Rio de Janeiro, Brazil. Visit GE Global Research on the web at www.geglobalresearch.com. Connect with our technologists at www.geglobalresearch.com/blog and www.twitter.com/geresearch.