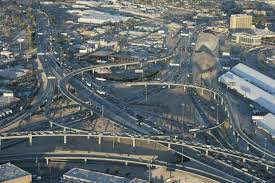 LAS VEGAS, Nev.—The Nevada Department of Transportation today named the design-build team led by Kiewit Infrastructure West Co. as the best value bidder for “Project NEON” – a 3.7-mile-long widening of Interstate-15 between Sahara Avenue and the “Spaghetti Bowl” interchange in downtown Las Vegas. It’s currently the busiest stretch of highway in Nevada with 300,000 vehicles daily, or one-tenth of the state population, seeing 25,000 lane changes an hour and 1,000 crashes annually. Traffic through the corridor is expected to double by 2035.

The best value bid was determined by a combination of technical components and total cost. Kiewit had both the highest technical score and lowest price with a $559.4 million bid that was 5 percent below the runner-up, Neon Mobility Constructors (a joint-venture between Granite Construction Inc. and Skanska USA Civil West). Las Vegas Paving Corp. was second runner-up with a $600 million bid.

Project NEON will connect the High Occupancy Vehicle (HOV) or carpool lanes on U.S. Highway 95 to the I-15 express lanes with a flyover bridge while creating direct access carpool ramps and a new interchange called “Neon Gateway.” Other planned upgrades include reconstructing the Charleston Boulevard interchange, extending Grand Central Parkway over the Union Pacific Railroad tracks as well as connecting to Industrial Road for improved downtown Las Vegas access and mobility. There will also be aesthetic and landscape upgrades, intelligent messaging signs and improved drainage, among other things.

Project NEON will reduce travel delays by 28 percent for a $110 million annual savings through increased productivity. It will improve air quality due to less idle time and vehicle exhaust while enhancing motorist safety from less merge and weave traffic.

NDOT will next enter into contract negotiations with Kiewit followed by an anticipated contract award in early November. It will mark the largest single contract award in the department’s 98-year history. Construction is tentatively scheduled to begin in the first quarter of 2016 with completion by mid- 2019. For more information about Project NEON, go to: www.ndotprojectneon.com