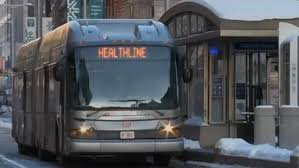 KANSAS CITY, Mo., Nov. 12, 2015—Public transportation user estimates in the United States now number more than 158 million people, or two-thirds of Americans ages 18 and older. Among those who have ridden public transportation in the last 12 months instead of driving, the most frequently cited reasons are cost-effectiveness (38 percent) and increased productivity or relaxation (37 percent), according to a new national survey by HNTB Corporation.

The latest America THINKS survey “Why Americans use public transportation” finds that transit users in the last year have taken this option over driving because it is more convenient (30 percent), reduces their carbon footprint (23 percent), is quicker than driving (20 percent), and safer (16 percent). And 20 percent took public transit because they don’t enjoy driving.

“Public transportation is a vital factor people use to determine where and how they choose to live, work and play,” Townes said. “The ability of our public transportation network to keep pace with this increasingly strong, growth-oriented demand will require public and private investment in the infrastructure that will support it.”

Fifteen percent of all respondents say proximity to public transit would impact where they choose to work, while more respondents aged 18-34 than those 35 and older (23 percent vs. 11 percent) agree that nearby access to public transit would affect where they choose to work. Other impacts Americans cited are frequency of visits to friends or family (14 percent) and how much they would be willing to spend to buy or rent their homes (10 percent).

At the same time, people who have access to public transportation where they live said inconvenience (42 percent) and lack of speed (33 percent) are most common reasons that kept them from using this mobility option in the past 12 months.

What’s in it for me?

While so many Americans now use public transit, such as bus, streetcar, light and passenger rail, four in five (80 percent) say they could be motivated to ride even more. Nearly half (45 percent) of this group cite improved service reliability as an incentive to increase their use of public transportation. Other motivators are real-time schedule displays (38 percent), cleaner equipment, stations and restrooms (36 percent), wi-fi access (35 percent), reduced crowding (33 percent) and comfortable seats (30 percent).

Among those who use public transportation, when asked what they liked most about it, riders cite affordable cost (28 percent), being a passenger (21 percent) and ease of use (16 percent). At the same time, overcrowding (19 percent), lack of speed (17 percent) and inconvenience (14 percent) are qualities transit users like the least.

Nearly seven in ten (69 percent) people agree that if they only used public transportation to get around for an entire year, it would cost less (53percent) or about the same amount (16 percent) as driving a car.

“Transit agencies are struggling to find the capital needed to balance maintaining the state of good repair of their systems, and to meet ever-increasing demands from the public for improved service,” Townes said. “It’s time to bring alternative funding and financing to the table and change the process of how we finance, plan and deliver transportation projects. These investments will reduce congestion, enhance our economic growth and improve the quality of life for everyone.”

HNTB’s America THINKS 2015 public transit survey polled a random nationwide sample of 1002 Americans between Sept. 15 and Sept 25. It was conducted by Kelton, which used an e-mail invitation and online survey. Quotas were set to ensure reliable representation of the entire U.S. population ages 18 and over. The margin of error is +/- 3.1 percent.