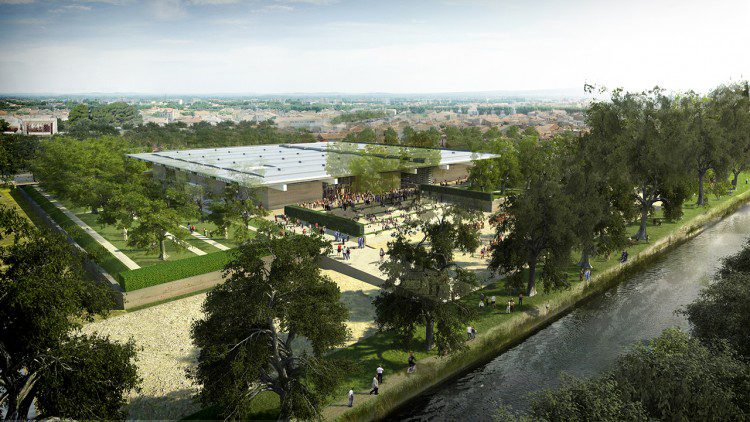 A ceremony was held today to mark the beginning of construction for MuRéNA, the Musée de la Romanité Narbonne. The event was attended by several dignitaries including the President of La Région Languedoc Roussillon, the Mayor of Narbonne and the President of the Agglomération de Grand Narbonne. The museum – the outcome of an international design competition won by Foster + Partners in 2012 – will house an array of Roman artefacts excavated in this region of southern France.

Once a major Roman port, the city of Narbonne has been continuously inhabited ever since, and has accrued an impressive legacy of buildings, ancient relics and archaeological sites. Foster + Partners’ design, devised in collaboration with museum specialist Studio Adrien Gardère, is based around the prime exhibit of the museum – a collection of more than 1,000 ancient stone relief funerary blocks, recovered from the city’s medieval walls in the 19th century. Their display informs the architecture of the building, forming a natural barrier at the heart of the simple, rectilinear structure and separating the public galleries from restoration spaces, which are also to be accessible to organised groups. Visitors will be able to glimpse the work of the archaeologists and researchers through its mosaic of stone and light, and the flexible display framework allows the reliefs to be easily reconfigured and used as an active tool for learning.

A single storey structure with administrative offices at mezzanine level, the museum has a precast concrete roof canopy, which provides thermal mass and contributes to a comprehensive environmental strategy. The canopy is elevated above a clerestory and punctuated with light wells, extending out to shade a wide public plaza around the museum. The building incorporates galleries for permanent and temporary exhibitions, a multimedia education centre and library, as well as restoration and storage facilities.

MuRéNA will be a new landmark at the entrance to the city, on a site adjacent to the Canal du Midi. The landscaping will reinforce the connection with the water to create a tranquil, natural setting. The ensemble is inspired by formal French gardens and the Roman courtyard and will feature an amphitheatre for open-air displays and events.

Spencer de Grey, Co-Head of Design, Foster + Partners:
“The ground breaking ceremony is always a momentous occasion for a project as it signifies the moment work begins on site. We are delighted to be working with La Region Languedoc Roussillon on this project, which is a showcase for the illustrious history of Narbonne. Inspired by the natural setting and the fascinating collection of Roman artefacts, the building hopes to strengthen the connections with the landscape and the region’s incredible past, as well as being a major centre for research, restoration and interpretation of the story of antiquity of the wider region. We look towards the completion of the museum with great anticipation.”