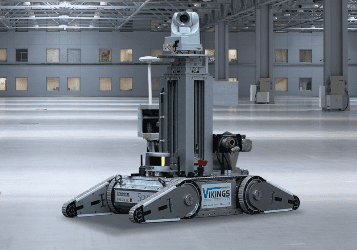 That’s precisely the inspiration behind the ARGOS Challenge, an international robotics competition designed to foster development of a new class of autonomous robots adapted to surveillance and technical maintenance of oil and gas sites (http://www.argos-challenge.com/en/challenge#sthash.PVW4vvtc.dpuf).  And, deploying its Viking Robot – equipped with Velodyne’s VLP-16 3D real time LiDAR Puck — a team from ISEEM, ESIGELEC’s Research Institute in Rouen, France, has emerged victorious over finalists from Japan, Austria, Spain and Switzerland.

ESIGELEC’s Team Vikings developed a 6DDL Monte Carlo Localization (MCL) based on  VLP-16 measurements, with an absolute position error less than 3cm and an orientation error less than 0.3° @20Hz.  Teams were evaluated on how well each addressed safety requirements, mobility and navigation, data collection, and human machine interface (HMI).

In the first round, the robot had to be able to achieve automatic inspection missions under real conditions.  Teams received the script two hours prior to the competition: the robot then needed to pass through control points to read gauges monitoring the state of pressure sensors and to determine whether the floodgates were open or closed.  The robot needed to traverse a 20-centimeter-high obstacle in order to automatically climb on or off the platform, and encountered various unexpected obstacles as well.  The ESIGELEC Vikings robot was able to perform the first mission on automatic mode in less than four minutes, far quicker than the 20 minutes allotted to the task.

“Clearly, our localization method based on VLP-16 measurements has been a key factor in our success,” said Xavier Savatier, Ph.D., Head of the Instrumentation, IT & Systems Department, ESIGELEC. “What stands out about the VLP-16 are its light weight and size, and its 360° field of view, which helped its integration on the mobile Vikings robot.  The sensor’s 3D laser scan strongly reduces the perceptual aliasing problem, which is an issue since there’s so much symmetry in the outdoor site.”

“The ARGOS Challenge dramatically and effectively demonstrates what robots equipped with real time LiDAR sensors can achieve in the demanding oil and gas environment,” said Wolfgang Juchmann, Director of North America Sales and Product Management, Velodyne.  “Over the duration of the challenge, robots will attempt vital tasks in simulated offshore or onshore platforms, with total autonomy and under the most extreme conditions.  Those are precisely the conditions for which we developed our multi-channel 3D LiDAR sensors.”

In time, robots will be capable of performing inspection tasks, detecting anomalies and intervening in emergency situations.  All of the autonomous missions require precise localization, an especially difficult task to perform in an industrial outdoor setting, with pipes in all directions and no walls to define the space.

The ARGOS Challenge research and development process runs for three years and includes three rounds of competition at the test site in Lacq, Midi-Pyrénées, in southern France.  The difficulty level will increase during the second round competition in March.  At that time, robots will be expected to identify unusual sounds such as gas leaks or cavitation bubbles inside the pipes, and check for unknown obstacles or fire extinguishers. Tests will take place on the upper levels of the structure, requiring robots to ascend and descend flights of stairs.

ESIGELEC provides training for engineering students in an array of fields, including electronics, information technologies, automation and robotics.  ESIGELEC is part France’s Grandes écoles academic institutions, which specialize in engineering and sciences.  It is under supervision of the Ministry of Higher Education and Research and jointly managed by the chamber of commerce of Rouen, the Society of Engineers in Electrical Engineering and a consortium of private companies.

Founded in 1983 and based in California’s Silicon Valley, Velodyne Acoustics, Inc. is a diversified technology company known worldwide for its high-performance audio equipment and real-time LiDAR sensors.  The company’s LiDAR division evolved after founder/inventor David Hall competed in the 2004-05 DARPA Grand Challenge using stereovision technology.  Based on his experience during this challenge, Hall recognized the limitations of stereovision and developed the HDL-64 high-resolution LiDAR sensor.  Velodyne subsequently released its compact, lightweight HDL‑32E sensor, available for many applications including UAVs, and the new VLP-16 LiDAR Puck, a 16-channel real-time LiDAR sensor that is both substantially smaller and dramatically less expensive than previous generation sensors. Market research firm Frost & Sullivan has honored the company and the VLP-16 with its 2015 North American Automotive ADAS (Advanced Driver Assistance System) Sensors Product Leadership Award. Since 2007, Velodyne’s LiDAR division has emerged as the leading developer, manufacturer and supplier of real-time LiDAR sensor technology used in a variety of commercial applications including autonomous vehicles, vehicle safety systems, 3D mobile mapping, 3D aerial mapping and security.  For more information, visit www.velodynelidar.com.  For the latest information on new products and to receive Velodyne’s newsletter, register here.