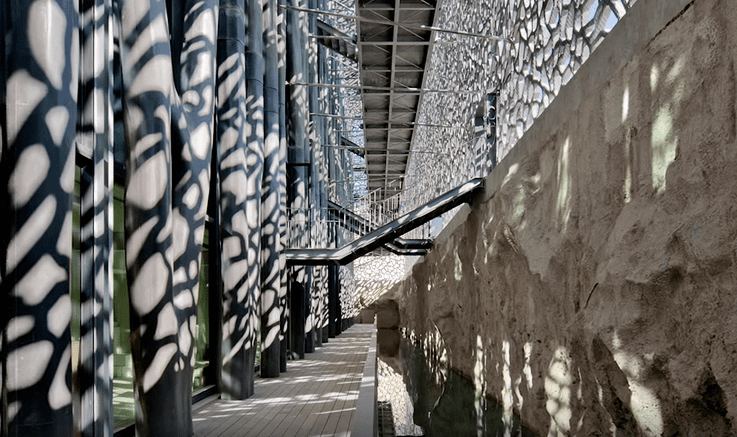 Farmington Hills, Michigan, Nov. 9, 2015—The American Concrete Institute (ACI) announces the winners of the 2015 Excellence in Concrete Construction Awards, who were honored during the ACI Awards Gala at the Concrete Convention & Exposition, Nov. 9, 2015 in Denver, Colo.

The highest honor, “The Excellence Award,” was presented to the MuCEM: Museum of European and Mediterranean Civilizations located in Marseille, France, and submitted by the ACI Paris Chapter.  This award is given to a project that demonstrates excellence in concrete innovation and technology, and stands out above all other entries.

As an icon of urban rejuvenation located on the banks of the 2600-year-old harbor at Marseille, France, the 3-exhibition story MuCEM building houses the first French National museum outside of Paris. It was visited by 3.4 million people during its first 15 months, much more than expected. At the end of the historic pier where immigrants from all Mediterranean countries once landed, the structure blends with the surrounding mineral and stone landscape, presenting a veiled, cubic appearance that is linked to the city with ultra-thin footbridges. Efficient, wide exhibition halls are surrounded by a sheltered climbing promenade facing the sea up to the scenic terrace.

The awards were created to honor the visions of the most creative projects in the concrete industry, while providing a platform to recognize concrete innovation, technology, and excellence across the globe.  In order to be eligible for participation in the Excellence Awards, projects needed to be winners at a local ACI Chapter level and submitted by that Chapter, or chosen by one of ACI’s International Partners.

An independent panel of esteemed industry professionals judged projects and selected winners based on architectural and engineering merit, creativity, innovative construction techniques or solutions, innovative use of materials, ingenuity, sustainability and resilience, and functionality.

The winning projects were selected from among several possible categories, with a first- and second-place winner available in each. In the inaugural awards program, the categories, winners, and project details included:

The categories, winners, and all project details can be found here. Photos of the all the winners can be accessed here.

The entry period is now open for the 2016 Excellence in Concrete Construction Awards.  Submittals are due by February 15, 2016.  Each Chapter or International Partner can sponsor up to two entries.  If a Chapter does not have a project awards program, they can still submit a project if there are plans to develop and launch an awards program within three years.  The ACI Chapter Awards Guide has been created as a planning tool to help Chapters get started.

Always advancing – The American Concrete Institute is a leading authority and resource worldwide for the development and distribution of consensus-based standards and technical resources, educational programs and certifications for individuals and organizations involved in concrete design, construction and materials, who share a commitment to pursuing the best use of concrete. ACI’s inclusive, individual member-driven structure and valuable, cost-effective benefits result in an essential organization that invites partnerships and welcomes all concrete professionals who wish to be a part of a respected, connected social group that provides an opportunity for professional growth, networking, and enjoyment.