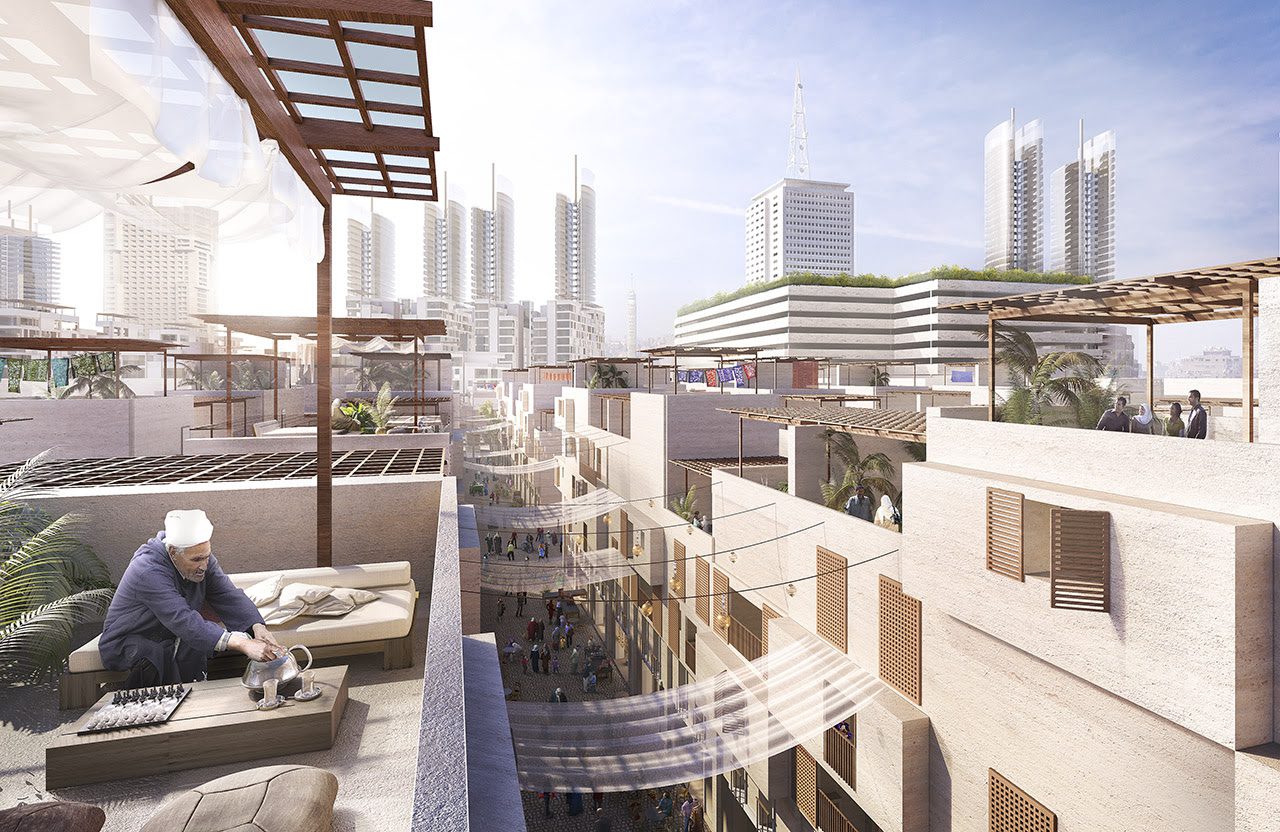 It was announced today by the Egyptian Ministry of State for Urban Renewal and Informal Settlements (MURIS) that Foster + Partners has won the competition to design the masterplan for the Maspero Triangle District in downtown Cairo. The neighbourhood, situated on the banks of the River Nile is characterised by its informal settlements and dense urban fabric. The 35ha masterplan aims to introduce new residential, commercial and retail spaces, while rehousing the majority low income population in the same area and retaining its unique character and spatial attributes.

The project is envisaged as a combination of public initiative with private investment support to produce a viable urban regeneration scheme. Based on estimated land values, the masterplan places commercial and residential spaces along the river edge and main street frontages, while mixed use buildings and open community spaces occupy the more private, central core of the scheme. This allows the existing population of the district to maintain their overlapping spatial live-work relationships while new office and retail spaces on the edges of the site create employment opportunities for the entire city of Cairo.

Following a flexible approach, the first phase will fill the empty spaces within the district with greenery to enhance the vibrant public realm in the community. This will improve the quality of life in the district and benefit the existing community immediately. Subsequently, the parts of the residential and commercial areas will be built in tandem creating a sustainable model of development.

The design of the public realm is key to the project, and in addition to the green spaces throughout the settlement, a central open space has been created at the heart of the neighbourhood for community events and celebrations. This space links directly to the food market, serving visitors and locals alike, which in turn leads to the retail spine and the hospital at the northern corner of the site. The settlement prioritises pedestrian traffic with its narrow, shaded streets, it also connects across the river to the exclusive neighbourhood of Zamalek via a footbridge that boosts the connectivity of the area. At the foot of the bridge, there is the ‘Lagoon’, lined with a number of cafés, restaurants and shops that will make this a highly desirable leisure destination.

Grant Brooker, Senior Executive Partner at Foster + Partners:
“We are delighted to have won the masterplan design competition for the Maspero Triangle district. We believe this is an exciting opportunity to transform the lives of the people that live in this neighbourhood – supporting the vibrant public realm by giving them greener community spaces, and a better place to live and work, while creating new spaces for offices, retail and residences. On the banks of the River Nile, the future of Maspero burns bright, and we are sure our sustainable model of development will set the benchmark for urban regeneration throughout the country.”