More Automation with Logo! and the KNX Building System Bus 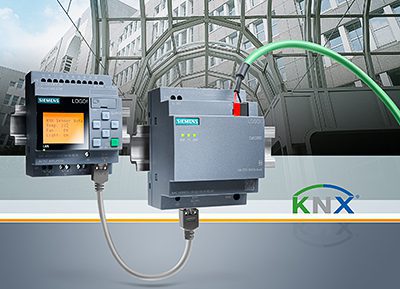 The Logo! communications module CMK2000 enables the latest Logo! 8 logic module series from Siemens to be integrated into the KNX building system bus. Logo! 8 is designed for smaller automation solutions. It can now be used in combination with the new communication module for building automation tasks, such as surveillance, access control, air-conditioning, lighting, shading and watering through to pump control. The Logo! KNX module CMK2000 communicates via Ethernet with Logo! 8. It transmits sensor data from KNX bus nodes to the logic module, where they are combined with logic functions. Logo! control commands are transmitted to KNX actuators via the communication module. 50 KNX communication objects can be configured, and linked in the Logo! program with counters, setpoints, and parameters to create automation solutions.

Logo! 8 also makes its own functionality available to the KNX nodes via the new Logo! CMK2000 communication module. There are 24 digital inputs, 20 digital outputs as well as 8 analog inputs and outputs in the maximum hardware configuration. Logo! 8 also enables the date and time to be synchronized for the nodes in the KNX system.