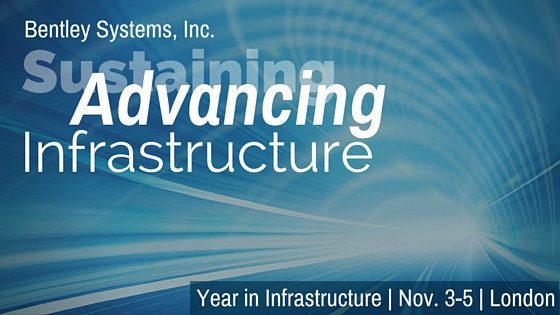 The Year in Infrastructure Conference is a global gathering of leading executives in the world of infrastructure design, construction, and operations. It features presentations and interactive sessions exploring the intersection of technology and business drivers, and how they are shaping the future of infrastructure delivery and investment returns. The 2015 event was also attended by more than 100 members of the media from leading publications around the globe who met with Bentley executives on Monday for the company’s annual Media Briefing. The agenda also includes presentations by finalists in the Be Inspired Awards program, culminating in the selection of the winning projects.

This year, 10 independent panels of jurors, comprising distinguished industry experts, selected the 18 Be Inspired Awards winners from 54 project finalists. These finalists had been previously chosen from over 360 submissions by organizations in 66 countries.

Candidates for Bentley’s Be Inspired Special Recognition Awards were selected by the jurors from the top finalist projects as well as other exemplary nominations. This selection was based on the projects’ uniquely innovative and visionary achievements that transcend the narrower focus of the standing Be Inspired Awards categories. The nominees were then reviewed by a panel of Bentley executives, who evaluated them based on the criteria established for each award.

Bentley Systems CEO Greg Bentley said, “This has been a year of major achievements for Bentley Systems that include the introduction of our CONNECT Edition infrastructure engineering software, providing a common environment for comprehensive project delivery. But the achievements that my colleagues and I are most proud of are those of our users. For while our goal at Bentley is advancing infrastructure, we can only accomplish it through the vision, talent, and dedication of the architects, engineers, constructors, and operations professionals who creatively apply our technology in pursuit of effective strategies for achieving new levels of project and/or infrastructure asset performance.

“Such achievements are exemplified by the extraordinary Be Inspired Award-winning projects we celebrated last night. I heartily congratulate the organizations that were instrumental in the delivery or operations of these truly inspiring projects. Moreover, I applaud all of the project nominees in this year’s awards program for their contributions to improving quality of life around the globe.”

The Be Inspired Special Recognition Awards winners for 2015 are as follows:

The Be Inspired Awards winners for 2015 are as follows:

Innovation in Rail and Transit

Innovation in Utilities and Communications

Bentley Systems has posted highlights of this year’s winning projects on its website. It will include more detailed descriptions of all nominated projects in the print and digital versions of its 2015 Infrastructure Yearbook, which will be published after the first of the year. To review the past 11 editions of this publication, which together feature more than 2,500 world-class projects recognized in the Be Inspired Awards program since 2004, access Bentley’s Infrastructure Yearbooks.

About Be Inspired Awards Program and The Year in Infrastructure Conference

The Year in Infrastructure Conference is a global gathering of leading executives in the world of infrastructure design, construction, and operations. This year’s conference includes:

The Year in Infrastructure 2015 Conference sponsors include:

Founded in 1984, Bentley has more than 3,000 colleagues in over 50 countries, more than $600 million in annual revenues, and since 2008 has invested more than $1 billion in research, development, and acquisitions.

Additional information about Bentley is available at www.bentley.com and in Bentley’s annual report. For Bentley news as it happens, subscribe to an RSS feed of Bentley press releases and news alerts. Visit The Year in Infrastructure 2015 Conference website for highlights of Bentley’s premier thought-leadership event, being held November 3-5, 2015, in London, U.K. To view a searchable collection of innovative infrastructure projects from the annual Be Inspired Awards, access Bentley’s Infrastructure Yearbooks. To access a professional networking site that enables members of the infrastructure community to connect, communicate, and learn from each other, visit Bentley Communities.

To download the Bentley Infrastructure 500 Top Owners ranking, a unique global compendium of the top public- and private-sector owners of infrastructure based on the value of their cumulative infrastructure investments, visit BI 500.