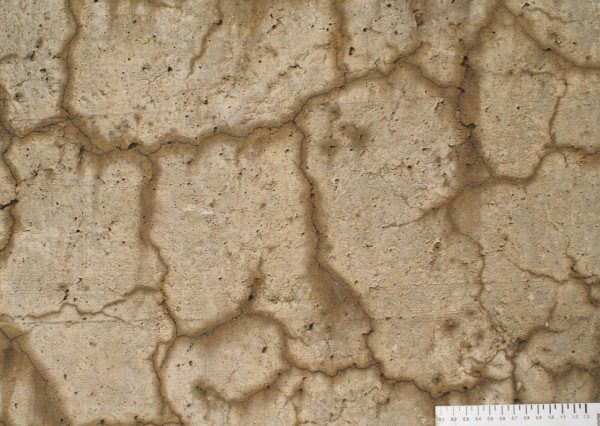 Researchers from the Paul Scherrer Institute (PSI) teamed up with colleagues from the Swiss Materials Science Lab Empa to study a degenerative sign of ageing in concrete: the so-called alkali-aggregate reaction (AAR). In the course of AAR, a material forms that takes up more space than the original concrete and thus gradually cracks the concrete from within as the decades go by.

The researchers have now explored the exact structure of this material. They managed to demonstrate that its atoms are arranged extremely regularly, making it a crystal. They also showed that the structure of this crystal is a so-called sheet-silicate structure. This specific structure had never been observed before. The researchers made their discovery thanks to measurements at the Swiss Light Source SLS at PSI. The research results could help towards the development of more durable concrete in future.

AAR is a chemical reaction that affects outdoor concrete structures all over the world. It happens when concrete is exposed to water or moisture. For instance, numerous bridges and up to twenty per cent of the dam walls in Switzerland are affected by AAR. With AAR, the basic ingredients in the concrete are actually the problem: cement – the main component of concrete – contains alkali metals such as sodium and potassium. Any moisture infiltrating the concrete – stemming for example from rainwater – reacts with these alkali metals, leading to an alkaline solution.

The second main ingredient in concrete is sand and gravel, which in turn are composed of minerals, such as quartz or feldspar. Chemically speaking, these minerals are so-called silicates. The alkaline water reacts with these silicates and forms a so-called alkali calcium silicate hydrate. This is itself able to absorb more moisture, which causes it to expand and gradually crack the concrete from within. This entire process is referred to as AAR.

AAR takes place extremely slowly, so that the cracks are initially only tiny and invisible to the naked eye. Over the course of three or four decades, however, the cracks widen significantly and eventually jeopardise the durability of the entire concrete structure.

Even if the chemical processes involved in AAR have long been known, nobody had identified the physical structure of the alkali calcium silicate hydrate formed in the course of AAR. The researchers at PSI and Empa have now managed to fill this knowledge gap. They studied the substance of a Swiss bridge constructed in 1969, which has been affected heavily by AAR. Researchers from Empa cut out a material sample from the bridge and ground down a small piece of it until they were left with a wafer-thin sample that was merely 0.02 millimetres thick. The sample was then taken to the Swiss Light Source SLS and irradiated with an extremely narrow x-ray beam, fifty times thinner than a human hair. Performing so-called diffraction measurements and a complex data analysis, the PSI researchers were eventually able to determine the crystal structure of the material with pinpoint precision.

They found that the alkali calcium silicate hydrate has a previously undocumented sheet-silicate crystal structure. “Normally, discovering an uncatalogued crystal structure means you get to name it,” explains Rainer Dähn, the first author of the study. “But it has to be a crystal found in nature, therefore we didn’t get that honour,” says the researcher with a smile. Andreas Leemann, Head of the Concrete Technology Group at Empa, had the idea for the current study. The researchers from PSI then brought their knowledge of the x-ray beam method to the table. “In principle, it’s possible to add organic materials to the concrete that are able to reduce the build-up of tension,” explains materials scientist Leemann. “Our new results provide a scientific basis for these considerations and could pave the way for the development of new materials.”