Past Earthquakes Play a Role in Future Landslides, Research Suggests 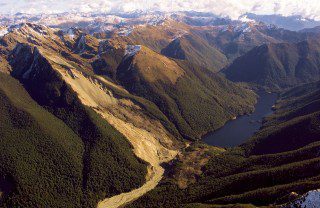 The likelihood of an area experiencing a potentially devastating landslide could be influenced by its previous exposure to earthquakes many decades earlier.

This is according to new research led by Cardiff University showing that areas which have experienced strong earthquakes in the past were more likely to produce landslides when a second earthquake hit later on.

Researchers speculate that this is because damage can reside in the side of mountains after an initial earthquake, and that the consequences of this damage may only be felt when a second earthquake hits.

These new insights could have important implications for disaster management and prevention by helping researchers better predict areas that may be susceptible to future landslides.

The consequences of the landslides that occurred after two large earthquakes hit Nepal earlier this year, killing more than 9,000 people and inflicting wide-spread damage, serves to show how valuable a prediction tool would be.

Predictive models that are currently used to assess the likelihood of landslides do not consider historical occurrences of previous earthquakes, and instead focus on the strength of the earthquake and the characteristics of the particular area, including the make-up of rock and the steepness of slopes.

“This could potentially be a significant gap in our understanding of the factors that lead to landsliding,” said Dr Robert Parker, lead author of the paper, from Cardiff University’ School of Earth and Ocean Sciences.

After the Nepal earthquakes, a program called ShakeSlide, developed by Dr Parker, was used to predict areas affected by landslides and assist in post-disaster efforts.

These new findings may lead to improved predictions, through models that consider the legacy of past earthquakes.

To reach their conclusions, the research team analysed data from two individual earthquakes that occurred in close-proximity to each other, in 1929 and 1968, on the South Island of New Zealand.

The epicentres of the two earthquakes were around 21 km apart and both triggered landslides over a large area.

The researchers firstly analysed the influence that standard factors, such as the strength of the earthquake and the gradient of hillslopes, had on the distribution of landslides.

Where the results were unexplained by these standard factors, the researchers investigated whether the results could be attributed to the legacy of previous events.

Their results suggested that hillslopes in regions that experienced strong ground motions in the 1929 earthquake were more likely to fail during the 1968 earthquake than would be expected on the basis of the standard factors alone.

“Our results suggest that areas that experienced strong shaking in the first earthquake were more likely to produce landslides in the second earthquake than would be expected based on the strength of shaking and hillslope characteristics alone,” said Dr Parker.

Dr Parker and his team have speculated that the increased likelihood of occurrence may be down to the fact that damage persists in the landscape after an initial earthquake, making it sufficiently weaker and thus more prone to a landslide if another earthquake hits in the future.

Dr Parker and his team are now investigating whether this ‘memory effect’ is seen in other areas, and have begun investigating the earthquakes that occurred in Nepal.
The new study has been published in the journal Earth Surface Dynamics.

Cardiff University is recognised in independent government assessments as one of Britain’s leading teaching and research universities and is a member of the Russell Group of the UK’s most research intensive universities. The 2014 Research Excellence Framework ranked the University 5th in the UK for research excellence. Among its academic staff are two Nobel Laureates, including the winner of the 2007 Nobel Prize for Medicine, University Chancellor Professor Sir Martin Evans. Founded by Royal Charter in 1883, today the University combines impressive modern facilities and a dynamic approach to teaching and research. The University’s breadth of expertise encompasses: the College of Arts, Humanities and Social Sciences; the College of Biomedical and Life Sciences; and the College of Physical Sciences and Engineering, along with a longstanding commitment to lifelong learning. Cardiff’s flagship Research Institutes are offering radical new approaches to pressing global problems. www.cardiff.ac.uk