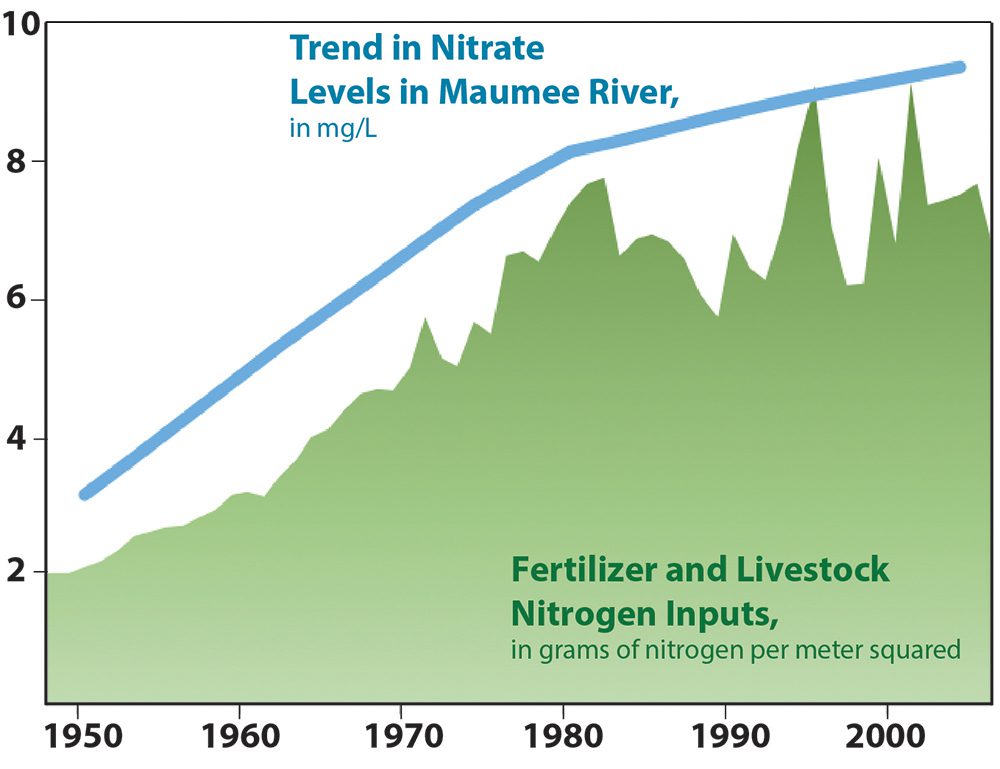 During 1945 to 1980, nitrate levels in large U.S. rivers increased up to fivefold in intensively managed agricultural areas of the Midwest, according to a new U.S. Geological Survey study. In recent decades, nitrate changes have been smaller and levels have remained high in most of the rivers studied.

The greatest increases in river nitrate levels coincided with increased nitrogen inputs from livestock and agricultural fertilizer, which grew rapidly from 1945 to 1980.  In some urbanized areas along the East and West coasts during the same period, river nitrate levels doubled. Since 1980, nitrate changes have been smaller as the increase in fertilizer use has slowed in the Midwest and large amounts of farmland have been converted to forest or urban land along the East coast.

“Long-term monitoring of 22 large U.S. rivers provides a rare glimpse into how water quality conditions have changed over the last 65 years,” said Edward Stets, lead author of the study. “Although the greatest increases in nitrate concentrations occurred prior to 1980, levels have since remained high in most rivers. Unfortunately, there is no widespread evidence of improving conditions.”

The USGS study, reported in the Journal of the American Water Resources Association, includes rivers flowing into the Great Lakes and coastal waters such as Long Island Sound, Delaware River estuary, Chesapeake Bay, San Francisco Bay, and the Gulf of Mexico.

Long-term monitoring of water quality is essential to track how changes in land use, climate, and water-quality management actions are impacting both local streams and rivers and valuable commercial and recreational fisheries in estuaries across the Nation. The USGS National Water-Quality Program is working on more detailed analysis of water quality trends within the past 10 to 50 years in small and large rivers across the Nation.

Information on USGS long-term water-quality monitoring can be accessed online.