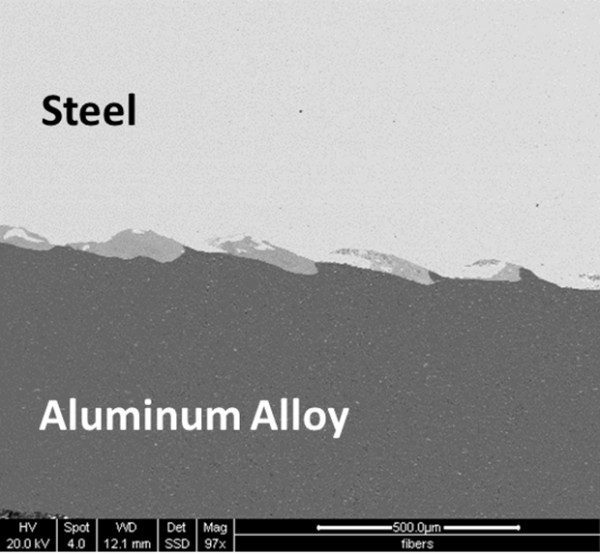 COLUMBUS, Ohio—Engineers at The Ohio State University have developed a new welding technique that consumes 80 percent less energy than a common welding technique, yet creates bonds that are 50 percent stronger.

The new technique could have a huge impact on the auto industry, which is poised to offer new cars which combine traditional heavy steel parts with lighter, alternative metals to reduce vehicle weight.

Despite recent advances in materials design, alternative metals still pose a challenge to manufacturers in practice. Many are considered un-weldable by traditional means, in part because high heat and re-solidification weaken them, said Glenn Daehn, professor of materials science and engineering at Ohio State, who helped develop the new technique.

“Materials have gotten stronger, but welds haven’t. We can design metals with intricate microstructures, but we destroy the microstructure when we weld,” he said.

“With our method, materials are shaped and bonded together at the same time, and they actually get stronger.”

Daehn explained the new process in a keynote address at the Materials Science & Technology 2015 meeting recently in Columbus.

In a common technique called resistance spot welding, manufacturers pass a high electrical current through pieces of metal, so that the metals’ natural electrical resistance generates heat that partially melts them together and forms a weld. The drawbacks: generating high currents consumes a lot of energy, and the melted portions of metal are never as strong afterward as they were before.

Over the last decade, Daehn and his team have been trying to find ways around those problems. They’ve amassed more than half a dozen patents on a system calledvaporized foil actuator (VFA) welding.

In VFA, a high-voltage capacitor bank creates a very short electrical pulse inside a thin piece of aluminum foil. Within microseconds (millionths of a second), the foil vaporizes, and a burst of hot gas pushes two pieces of metal together at speeds approaching thousands of miles per hour.

The pieces don’t melt, so there’s no seam of weakened metal between them. Instead, the impact directly bonds the atoms of one metal to atoms of the other. Seen under a high-powered microscope, the bond is actually quite beautiful, and often features delicate curlicues in spots where veins of both materials extend outward and wrap around each other.

So far, the engineers have successfully bonded different combinations of copper, aluminum, magnesium, iron, nickel and titanium. They have created strong bonds between commercial steel and aluminum alloys—a feat which is impossible normally. Also, high-strength steel and aluminum join together with weld regions that are stronger than the base metals.

The technique is powerful enough to shape metal parts at the same time it welds them together, saving manufacturers a step.

Daehn and his team now want to join with manufacturers to further develop the technology, which will be licensed through Ohio State’s Technology Commercialization Office.

This project is funded by the Department of Energy and theNational Science Foundation (NSF), and was one of the first to participate in I-Corps@Ohio, a new collaboration modeled after and approved by NSF’s successful I-Corps commercialization program. Ohio is the first to have a statewide collaboration that is based on the NSF model, yet fully funded by the state. The program is funded and supported by the Ohio Department of Higher Education.