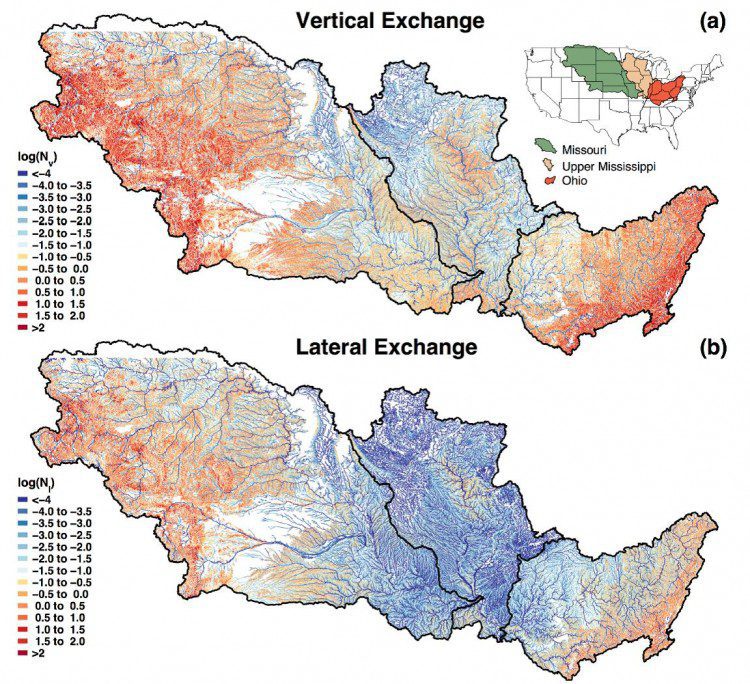 Working throughout the Mississippi River basin, USGS scientists and collaborators from the University of Texas at Austin have established the river’s own potential to decrease its load of nitrate and identified how certain basic river management practices could increase that potential.

“Increasing nitrogen concentrations, mostly due to the runoff of agricultural fertilizers, in the world’s major rivers have led to over-fertilization of waters downstream, diminishing their commercial and recreational values,” said William Werkheiser, USGS associate director for water. “Understanding the natural potential of rivers themselves to remove nitrogen from the water, and boosting that potential, is a promising avenue to help mitigate the problem.”

Beneath all streams and rivers is a shallow layer of sediment that is permeated by water exchange across the sediment surface. This thin region in the sediment beneath and to the side of the stream is referred to by scientists as the “hyporheic” zone, from Greek words meaning “under the flow.” 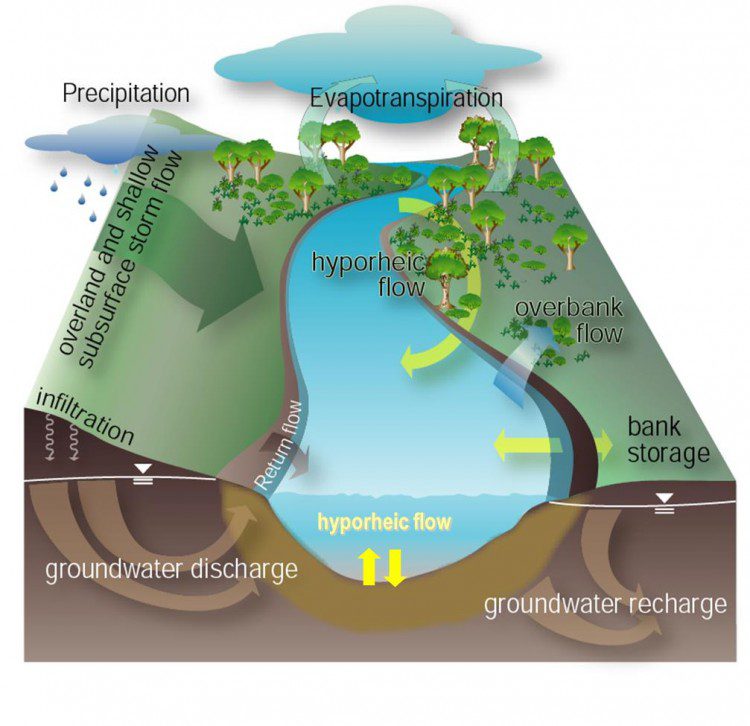 The river corridor includes surface and subsurface sediments beneath and outside the wetted channel. Greater interaction between river water and sediment enhances important chemical reactions, such as denitrification, that improve downstream water quality.

“We’ve found in previous studies,” said Jesus Gomez-Velez, lead author of the study, “that the flow of stream water through this thin zone of sediment enhances chemical reactions by microbes that perform denitrification, a reaction that removes nitrogen from the aquatic system by converting it to nitrogen gas.” A USGS post-doctoral scientist at the time of the study, Gomez-Velez is now an assistant professor at the New Mexico Institute of Mining and Technology.

“Rivers with more vertical exchange are more efficient at denitrification, as long as the contact time with sediment is matched with a reaction time of several hours,” observed co-author Jud Harvey, the USGS team leader for the study.

The study findings suggest that managing rivers to help avoid the sealing of streambeds with fine sediments, which decreases hyporheic flow, would help exploit the valuable natural capability of rivers to improve their own water quality.  Other river management and restoration practices that protect permeable river bedforms could also boost efficiency, such as reducing fine sediment runoff to rivers.

However, typical river channel restoration strategies that realign channels to increase meandering would not be as effective, because a comparatively small amount of water and river nitrate are processed through river banks compared with river beds.  Although not yet tested in the model, allowing natural flooding over river banks onto floodplains may also be an effective means of processing large amounts of river water to remove nitrogen before it reaches sensitive coastal waters.

Conducted by USGS and partners from the New Mexico Institute of Mining and Technology and the University of Texas at Austin, the research investigation was recently published in the journal Nature Geoscience.