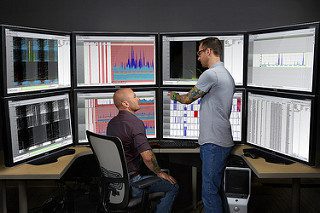 RICHLAND, Wash.—The Department of Energy’s Pacific Northwest National Laboratory has been named a supporting Laboratory to the National Infrastructure Simulation and Analysis Center. NISAC is a Department of Homeland Security program that addresses the potential vulnerabilities and consequences of disruption of our nation’s critical infrastructure.

NISAC coordinates scientific computational capabilities, and modeling and analysis expertise to discover relationships and develop insights about infrastructure vulnerabilities in the case of natural disasters, and both intentional and accidental manmade events.

“NISAC recognizes PNNL’s in depth analytic capabilities in critical infrastructure,” said Alan Berscheid, NISAC principal investigator at PNNL. “The expertise can be used to simulate events ranging from hurricanes to terrorist attacks and to predict and track potential impacts to critical facilities and the economy.”

PNNL will contribute advanced computer modeling and simulation capabilities to look at the dependencies, interdependencies, vulnerabilities, and complexities of important critical infrastructure sectors such as dams, water, transportation, energy and information technology.

“The establishment of PNNL as a NISAC laboratory is indicative of PNNL’s ongoing commitment to DHS’s mission to protect and defend our nation’s critical infrastructure by aiding decision makers in the areas of policy analysis, investment and mitigation planning, education and training and near real-time assistance to crisis response organizations,” said PNNL program director Tim McPherson.

Interdisciplinary teams at Pacific Northwest National Laboratory address many of America’s most pressing issues in energy, the environment and national security through advances in basic and applied science. Founded in 1965, PNNL employs 4,400 staff and has an annual budget of nearly $1 billion. It is managed by Battelle for the U.S. Department of Energy’s Office of Science. As the single largest supporter of basic research in the physical sciences in the United States, the Office of Science is working to address some of the most pressing challenges of our time.