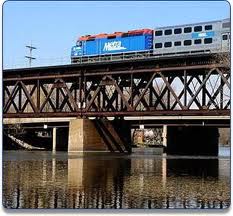 Oct. 26, 2015—U.S. Senator Dick Durbin (D-IL) and U.S. Representative Tammy Duckworth (D-IL) today announced that the Department of Transportation has awarded $14 million in federal funding through the TIGER grant program to Metra to replace the existing rail bridge over the Fox River.  A new double track bridge is expected to eliminate the bottleneck between freight rail and Metra’s Milwaukee District – West Line while upgrading technology that will allow for Positive Train Control (PTC) compliance

“Replacing the 134-year-old Fox River Bridge will spur local economic development and create well-paying jobs in the 8th District, save Illinois commuters thousands of hours in wasted time each year and improve passenger safety,” said Congresswoman Duckworth, who led a Congressional coalition in sending a letter of support for the project to U.S. Transportation Secretary Anthony Foxx. “Traffic is only going to increase in the future and our region’s infrastructure needs to keep up if we want our economy to grow. I’m proud to join Senator Durbin in announcing this significant infusion of federal funds to bring the Fox River Bridge into the 21st century.”

The Fox River Bridge, built in 1881 and the only remaining single-track segment of the line into Chicago, causes significant delays for the roughly 50 Metra trains and up to 8 freight trains that pass over it each day. Since arriving in the U.S. House, Congresswoman Duckworth has been an effective advocate for the Fox River Bridge replacement project, even touring the bridge last year with Metra CEO Don Orseno (photos hereand here). In each of the last three years, the Congresswoman successfully organized and led several members of the Illinois Congressional delegation in urging the Department of Transportation to fund this project, which ultimately resulted in today’s grant.

“The Fox River Bridge – which serves 49 commuter trains and up to 8 freight trains each day – is an integral part of Chicago’s rail infrastructure,” said Durbin whose letter of support for the project can be found HERE.  “Metra’s improvement plan will bring an outdated bridge into the 21st century with new technology that will dramatically improve safety and double tracking that will increase speed and reliability for the 6.8 million passengers that rely on the MD-W line every year.  I am glad to join Representative Duckworth in support of this important job-creating project.”

Background on the TIGER Grant Program

The Department of Transportation’s TIGER – Transportation Investment Generating Economic Recover – grant program was originally created as part of the American Recovery and Reinvestment Act in order to give local communities the chance to apply directly to the federal government for funding their highest priority transportation projects. The program invests in a variety of transportation modes, selects projects through a transparent, competitive and merit-based process, and requires the Secretary of Transportation to provide a full description of how applications will be evaluated. The grant program also ensures that projects across the country are funded, and includes several provisions to balance the needs of urban and rural areas. Demand for the program every year is dramatically higher than available funding.

Illinois has been the second largest beneficiary of TIGER funding across the country, receiving twice as much money through the competitive program than through traditional federal highway funds distributed by formula. Since the program was first established in 2009, Illinois has received nearly $290 million in TIGER funding to support critical transportation and infrastructure projects across the state including: the Warehouse District in Peoria, the Multimodal Facilities in Moline, Normal, Urbana, and Alton, the Chicago Lakefront Bridge in Bronzeville, and the CREATE project in Chicago.