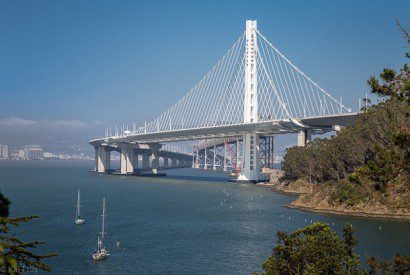 Replacing the eastern span of the Bay Bridge — a vital link between the East Bay and San Francisco — was originally projected to cost $250 million. By the time the span was completed, the project came in at $6.5 billion.

How that happened is the topic of a new book by Karen Trapenberg Frick, a UC Berkeley adjunct professor of city and regional planning and co-director of the UC Transportation Center.

In 1989, one of California’s biggest earthquakes in decades hit the Bay Area, causing a partial collapse of the eastern span of the bridge and prompting officials to commit to rebuilding the structure. What followed, however, was more than two decades of discussion about complex designs — and skyrocketing costs.

Frick writes about the mega-project in Remaking the San Francisco-Oakland Bay Bridge. The book asks the question, If safety was the reason to replace the bridge, why did it take almost 25 years to do so? She also offers advice for how to keep a similar catastrophe from happening again.