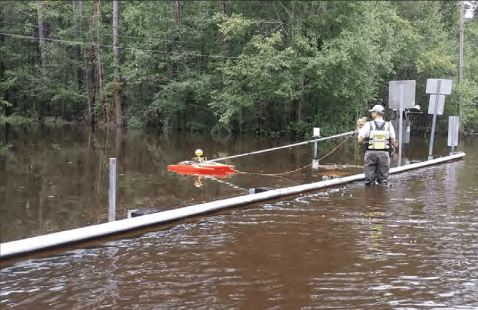 One of these streamgages, located on the Black River at Kingstree, South Carolina, recorded its largest peak in the 87 years it has existed. The streamgage showed that the Black River reached a peak streamflow of 83,700 cubic feet per second and a stage of 22.65 feet. The previous maximum on the Black River occurred on June 14, 1973. Additional annual peak stage data collected by the National Weather Service at the gauge prior to USGS operation indicates this is likely the highest flood since 1893.

“This was absolutely an historic flood for South Carolina,” said John Shelton, the USGS hydrologist who oversaw the agency’s field response and gauging operations in South Carolina. “Throughout the event we continued to monitor our network of about 170 real-time streamgages, and we sent dozens of teams out in the field to verify what we were seeing. Fortunately, we have quite a few long-standing streamgages in South Carolina, so we can put these floods into historical context.”

One of the longest-running streamgages in South Carolina is the one on the Congaree River in Columbia, with annual records back to 1892 and even flood information for 1852. That means that there are 123 years of record to place the October 2015 floods into perspective.

Throughout the entire flood, the USGS deployed nearly 100 people who collected almost 250 distinct streamflow measurements in South Carolina, North Carolina, and Georgia; deployed and recovered storm-tide sensors and Rapid-Deployment Gauges; and flagged and determined the elevation of close to 600 high-water marks in support of response and recovery missions for FEMA.  The effort, led by the USGS South Atlantic Water Science Center, which has offices in South Carolina, North Carolina, and Georgia, was supported by teams from other USGS offices in Alabama, Florida, Mississippi and Pennsylvania.

A total of 8 streamgages were destroyed or damaged during the floods in South Carolina, with five replaced with Rapid-Deployment Gauges within hours of the gauge outage.

In South Carolina, the teams made about 140 streamflow measurements at about 86 real-time streamgages to verify or update existing information on streamflow at that site. This information, along with a comparison of historic peak flows or stages and a chronology of major flood events in South Carolina since 1893, is available in a new USGS report entitled “Preliminary Peak Stage and Streamflow Data at Selected USGS Streamgaging Stations for the South Carolina Flood of October 2015.”