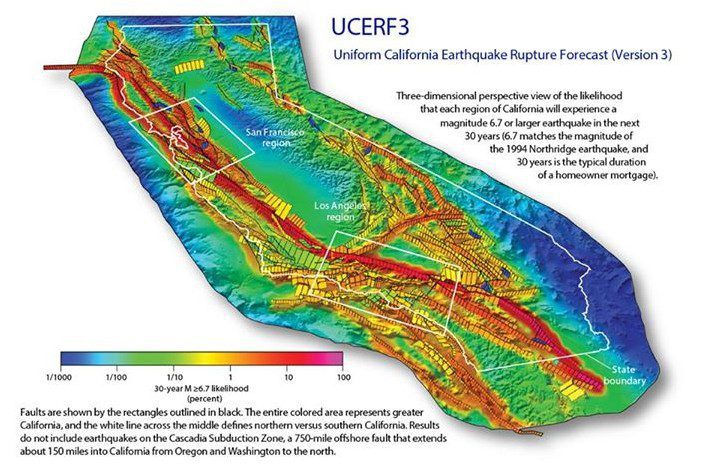 A research paper from NASA’s Jet Propulsion Laboratory, recently published in AGU’s online journal Earth and Space Sciences, predicts a 99.9 percent likelihood of a major earthquake near Los Angeles within the next three years. This conclusion was inferred from research into the 2014 La Habra earthquake. The report has gained widespread distribution and has prompted a statement from the U.S. Geological Survey that cautions that scientific rigor is not present in the report and that findings have not been examined by long-established committees that evaluate earthquake forecasts and predictions.

Tectonic motion across the Los Angeles region is distributed across an intricate network of strike-slip and thrust faults that will be released in destructive earthquakes similar to or larger than the 1933M6.4 Long Beach and 1994 M6.7 Northridge events. Here we show that Los Angeles regional thrust, strike-slip, and oblique faults are connected and move concurrently with measurable surface deformation, even in moderate magnitude earthquakes, as part of a fault system that accommodates north-south shortening and westerly tectonic escape of northern Los Angeles. The 28 March 2014 M5.1 La Habra earthquake occurred on a northeast striking, northwest dipping left-lateral oblique thrust fault northeast of Los Angeles. We present crustal deformation observation spanning the earthquake showing that concurrent deformation occurred on several structures in the shallow crust. The seismic moment of the earthquake is 82% of the total geodetic moment released. Slip within the unconsolidated upper sedimentary layer may reflect shallow release of accumulated strain on still-locked deeper structures. A future M6.1–6.3 earthquake would account for the accumulated strain. Such an event could occur on any one or several of these faults, which may not have been identified by geologic surface mapping.

This paper claims a 99.9% probability of an earthquake of magnitude 5 or greater occurring in the next 3 years within a large area of Southern California without providing a clear description of how these numbers were derived. The area—a 100 km radius circle centered on the city of La Habra—is a known seismically active area. For this same area, the community developed and accepted model of earthquake occurrence, “UCERF3”, which is the basis of the USGS National Seismic Hazard Maps, gives a 3-year probability of 85%. In other words, the accepted random chance of a M5 or greater in this area in 3 years is 85%, independent of the analysis in this paper.

While the earthquake forecast presented in this paper has been published in the online journal Earth and Space Sciences, it has not yet been examined by the long-established committees that evaluate earthquake forecasts and predictions made by scientists. These committees, the California Earthquake Prediction Evaluation Council, which advises the California Office of Emergency Services, and the National Earthquake Prediction Evaluation Council, which advises the U.S. Geological Survey, were established to provide expert, independent assessment of earthquake predictions.

The earthquake rate implied by the 99.9% probability is significantly higher than observed at any time previously in Southern California, and the lack of details on the method of analysis makes a critical assessment of this approach very difficult. Therefore, the USGS does not consider the analysis presented in this paper a reason to change our assessment of the hazard.

The main point of contention is the 99.9% probability, which puts too great of a certainty according to both the USGS as well as statements from the authors. The probability used by the USGS for such a magnitude 5 or greater earthquake in this area over the next three years is 85 percent.

Be certain to check out two AIA-accredited PDH opportunities.

via our V1 Education site.