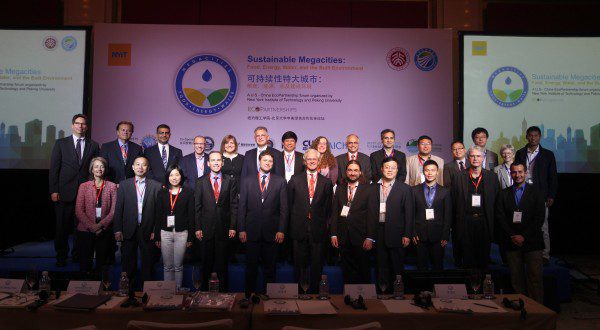 BEIJING, Oct. 20, 2015—Experts from China and the United States met in Beijing today and reiterated the need for a systems-based, coordinated response to the world’s critical food, energy, and water (FEW) challenges. Engineers, urban planners, and policymakers shared their perspectives at a conference co-hosted by New York Institute of Technology (NYIT) and Peking University (PKU), “Sustainable Megacities: Food, Energy, Water, and the Built Environment.”

“Megacities” of more than 10 million inhabitants are a critical area for research into the world’s food-energy-water nexus. The pace of urbanization is increasing, and cities globally use more than their share of resources. The earth’s freshwater reserves are in decline, while demand for energy and food goes up.

In opening the conference, NYIT President Edward Guiliano, Ph.D. stressed the critical role of universities in helping cities face their challenges. “Universities do the research and development that help solve problems,” he said. “We can say that cities made universities possible and universities return the favor. We make cities livable.”

Chunmiao Zheng, Director of PKU’s Institute of Water Sciences and Dean of the School Environment at South University of Science and Technology, and Jie Wang, Vice-President of PKU, also addressed the value of research into megacities and associated developments.

The day’s panels emphasized maintaining an efficient food-energy-water balance by comprehensively integrating information about the costs, needs, and availability of FEW resources into management practices and policies. This streamlining starts with recognizing new ecological constraints and includes planning for resiliency and strategic data collection and analysis.

Jennifer L. Turner, director of the China Environment Forum at the Woodrow Wilson International Center for Scholars, discussed China’s “water-energy chokepoints,” focusing on coal’s increasing water footprint and the growing energy needs to clean, desalinate, and transfer water. She noted that the United States has similar water-energy chokepoints and highlighted some emerging policy, research, and civil society cooperation on these resource constraints, such as the Natural Resource Defense Council’s coal cap work that involves the Chinese Institute of Hydropower and Water Resources.

Keith Schneider of Circle of Blue’s Global Choke Point project contrasted what he called “the old order” of the 20th century, which involved wasting relatively cheap resources, with the current age of “depleted resources, growing populations, and climate disruptions.” Schneider showed how these 21st-century conditions are contributing both to a greater threat of natural disaster and to widespread community resistance to “big dams, big power plants,” and other large projects.

“Smart cities” will use information technology to monitor and adjust traffic flows, indoor temperatures, and other factors to improve efficient use of resources. Babak Beheshti of NYIT’s School of Engineering and Computing Sciences led a panel, including NYIT’s Jonathan Voris and Wuhan University’s Xiaohui Cui, which shared methods to gather and analyze accurate data via intelligent infrastructure systems. These systems include RFID (Radio Frequency Identification) tags, vehicular systems, and other networks of sensors used in many densely populated areas.

A champion of global education, NYIT has a record of successfully gathering stakeholders from various disciplines to address global challenges. For more than a decade, NYIT has been in the forefront of both the creation of knowledge and the dissemination of knowledge around issues relating to sustainability.

NYIT and PKU joined in a U.S. and China government-sponsored EcoPartnership in 2013. The EcoPartners’ charge is to cultivate research cooperation surrounding technologies to protect groundwater. Funding for this conference and workshop was provided by the U.S. National Science Foundation and the National Natural Science Foundation of China, with additional support from the following co-sponsors: Wuhan University; the International School of Software, Wuhan University; South University of Science and Technology of China; Communication University of China; the American Institute for Chemical Engineers (AIchE); HDR, Inc.; the Institute for Sustainability; and the International Society for Water Solutions.