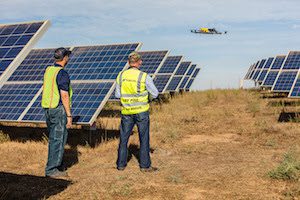 LIVERMORE, Calif., Oct. 15, 2015—Topcon Positioning Group announces it has received a Section 333 exemption from the Federal Aviation Administration (FAA) that allows for operation of its Falcon 8 rotary-wing unmanned aerial system (UAS) in the United States.

The Topcon Falcon 8 — powered by Ascending Technologies — is designed for inspection and monitoring, as well as survey and mapping applications.

“Along with our exemption for the Sirius fixed wing system, the Falcon 8 exemption extends the Topcon UAS presence in the rotary-wing solutions market to be an even more powerful resource and provide demonstrations and training,” said Eduardo Falcon, executive vice president and general manager of the Topcon GeoPositioning Solutions Group. “Aerial data collection has a strong future in all the industries we serve, and the possibilities for survey, construction, agricultural, and emerging inspection applications are seemingly limitless.

“Building on the success the Falcon 8 has already seen in Europe, this exemption allows Topcon to expand on that momentum in the U.S. market,” said Falcon.