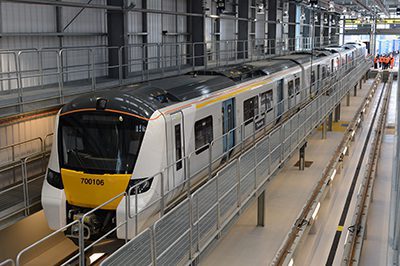 Today, British Transport Secretary Patrick McLoughlin formally opened the new Siemens and Govia Thameslink Railway (GTR) train care facility in Crawley, West Sussex. Purpose-built for the new Thameslink trains, the “Three Bridges” depot was constructed around 30 kilometers south of London. Siemens is investing around 400 million Euros in the construction of two depots. A second similar hi-tech train care facility is currently under construction in Hornsey, to the north of London, and is on track to be completed in summer 2016.

Patrick McLoughlin, Secretary of State for Transport, said: “Our plan for passengers is delivering real improvements for those who use Thameslink services. The opening of this state-of-the-art facility is a major milestone and paves the way for an impressive new fleet of hi-tech trains to come into service from Spring next year. The improvements will transform rail travel for millions of passengers, with better journeys on fantastic new Class 700 trains, improved connections and upgraded stations. The programme is also creating thousands of jobs across the country.”

“For Siemens, making sure our trains are available for service – day in, day out – is key. It is an important part of our commitment to our customers. Important for us is predictive maintenance – we want to prevent malfunctions before they even occur. And our new Thameslink trains and this depot have been designed and built specifically based on that approach. They will be role models for Siemens projects all over the world,” said Jochen Eickholt, CEO Siemens Mobility Division.

The depot is the result of extensive collaboration between Siemens, operator Govia Thameslink Railways (GTR) and rail infrastructure company Network Rail. In the future, the depot will play a key role in ensuring that trains run reliably on this busy stretch of the Thameslink network that crosses the British capital. The new Class 700 Desiro City trains will be maintained and serviced here. In fact, the depot is already home to the first two trains from the new Thameslink fleet which are currently being commissioned locally.

Charles Horton, GTR’s Chief Executive Officer, said: “We are thrilled that Siemens have handed us the keys to run this fabulous new depot. The new trains they will maintain for us here will transform our passengers’ journeys, providing much more space for today’s busy south-east commuter services as well as state-of-the-art accessibility and onboard information systems.”

The depot is fully equipped with signal technology and incorporates key personnel safety features including a depot protection and emergency electrical isolation system. It also has an automatic inspection facility which uses laser measurement to accurately predict when key train components need to be maintained or replaced. Other features include an in-cab simulator which will provide the theoretical and practical training each driver must undergo in order to drive the new trains.

The opening of the depot marks another major milestone for the Thameslink Programme. Funded by the British government, the programme is set to deliver a wide range of rail infrastructure improvements including the reconstruction of four stations, one of which is London Bridge, one of the capital’s main stations. The large-scale investments will also be used to provide new trains and signal technology as well as new stabling facilities across southern England that will transform north-south travel through London. The programme – when complete – will provide a service tailored to future passenger needs.

The introduction of the new 12- and 8-carriage Class 700 trains will significantly increase capacity, providing up to 80% more seats across the Central London route, between Blackfriars and St Pancras. That will also mean a 60% increase in carriages and over 50% more seats between St Albans and London. Passengers will benefit from 1000 additional seats on trains travelling south to Brighton and 15% more seats from Peterborough to Cambridge. Besides increased capacity and improved reliability of service, direct new travel opportunities will be provided including new journeys between Brighton and Cambridge as well as Peterborough and Gatwick Airport.

By the end of 2018, there will be 115 new Class 700 trains in operation, providing a metro-style service of up to 24 trains per hour running through the center of London. These trains will also be the first in Europe to use the European Train Control System (ETCS) and Automatic Train Operation (ATO) devices, guaranteeing passengers a safer, more reliable service on all routes.