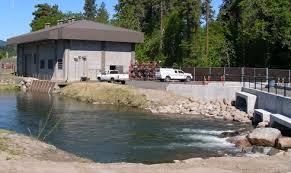 Farmers Irrigation District, Energy Trust of Oregon and the Oregon Governor’s office will unveil at a ribbon-cutting ceremony an efficient 3-megawatt hydropower turbine that generates energy from water flowing through irrigation pipes. The new turbine and generator will produce 12 percent more renewable power than the two older turbines, and is expected to save $100,000 to $150,000 per year in maintenance costs.

Farmers Irrigation District will unveil a 3-MW hydropower turbine that generates energy from water flowing through irrigation pipes, replaces two older turbines and repowers the district’s operations with a more efficient system. The district began investing in hydropower in 1986 as a way to generate revenue and defray the cost of delivering water to approximately 5,800 acres and 1,900 residential and agricultural users.

The new turbine and generator will produce 12 percent more renewable power than the older turbines, bringing in $130,000 more in revenue. In addition, the district expects to save its customers $100,000 to $150,000 per year in maintenance costs.

Energy Trust provided a $900,000 incentive for the $4.96 million project, which will deliver energy to Pacific Power. The district has worked with Energy Trust on several past projects, including constructing an energy-efficient pumping station to replace individual user pumps, piping portions of its delivery system, and pressurizing and filtering the delivery of irrigation water.