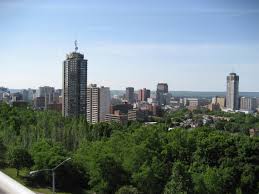 TORONTO, Oct. 14, 2015 – The City of Hamilton’s corporate culture is built on courageous change, collective ownership, sensational service and empowered employees. The City fosters this culture with the help of technology. Since adopting ArcGIS, Esri’s geographic information system (GIS) platform in 2013, the City has launched several mapping apps that facilitate more efficient data and service delivery, and enhanced citizen engagement. For this outstanding work, Esri Canada today presented the City of Hamilton with an Award of Excellence in GIS.

“The City of Hamilton has achieved significant advances using ArcGIS in a relatively short time,” remarked Alex Miller, president, Esri Canada. “The apps that they’ve developed are bringing tremendous efficiencies to the City which, in turn, increase the satisfaction of their partners and citizens. Their projects effectively demonstrate how GIS supports intelligent government operations.”

Two years ago, the City’s Public Works Department evaluated ArcGIS Online to see how the cloud-based platform could be used in their operations. They attended the Esri International User Conference and were struck by the overwhelming number of apps that could be developed with the technology. Inspired by what they had seen, they worked with Esri Canada’s Professional Services team to revamp Hamilton’s online engineering records system. In 2014, the City retired its homegrown plans and records system and launched SPIDER (Spatially Indexed Engineering Records), which allows staff and partners to access more than 200,000 engineering records through an interactive Web map. SPIDER received more than 1,500 visits within its first month of release and has provided the City with an efficient data-sharing framework.

Recently, the City used ArcGIS Online to support their streetlight replacement project and meet eligibility requirements for a $3.5-million provincial grant for converting to cost-effective LED lighting. Leveraging app templates, they quickly developed a mobile app for collecting data on 10,000 municipal streetlights that need replacement. With only one full-time inspector equipped with a tablet, the City has been able to inspect all streetlights replaced by contractors, confirm that the right type of LED light was used and approve the work for payment, within five months – saving the City approximately a month of staff time.

They also created the Hamilton Streetlighting Story Map to keep stakeholders informed of the project. The map incorporates various information – such as installation timelines, types of LED lights used, approved contractors and amount of energy saved – presented in different formats into one cohesive map journal. It integrates real-time data from the City’s operational dashboard to show the number of successfully installed streetlights and includes a map with before-and-after installation photos.

As well, the City has released Invest in Hamilton – an interactive map journal that helps attract investment. Previously, the City’s Economic Development Department used slides, videos and handouts to present their story to potential investors. Using ArcGIS Online, they have consolidated their marketing materials into an easy-to-understand story map that leverages their multimedia content.

“Our recent work with Esri Canada has empowered our employees with exceptional GIS tools for delivering greater transparency and enhanced services to citizens,” said Gord McGuire, manager, Geomatics & Corridor Management, City of Hamilton.  “ArcGIS has helped us become more agile; it has improved our capability to leverage enterprise data and quickly deploy apps to support our workflows. We’re excited about the numerous possibilities for creating apps to accelerate municipal projects across our organization.”

View a gallery of the City of Hamilton’s public works mapping apps at: hamilton.maps.arcgis.com.
Learn more about the ArcGIS platform at: esri.ca/arcgis.

About the City of Hamilton

With a population of nearly 520,000, Hamilton is located at the western end of Lake Ontario in the Golden Horseshoe region. The City of Hamilton’s long-term vision is to make Hamilton the best place to raise a child, promote innovation, engage citizens and provide diverse economic opportunities. More information is available at hamilton.ca.

Founded in 1984, Esri Canada provides enterprise geographic information system (GIS) solutions that empower businesses, governments and educational institutions to make timely, informed and mission-critical decisions by leveraging the power of geography.  The company distributes the world’s leading GIS software from Esri, Schneider Electric, Cityworks–Azteca Systems, Inc. and other technology partners.  Headquartered in Toronto, the company serves over 10,000 customers from 16 regional offices across Canada.  Esri Canada has joined the elite rank of Canada’s Best Managed companies and has been named to the Branham300.  Information about the company can be found at esri.ca.