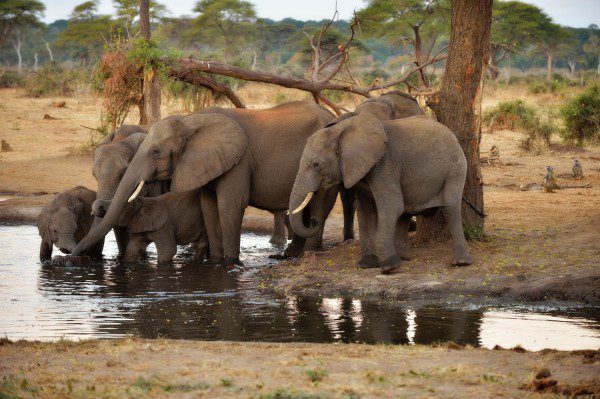 While concentrated wildlife can be a boon for ecotourism operations, there ​can be substantial environmental impacts.

“Loss of habitat and limitation of wildlife access to rivers and floodplains in water-restricted regions may increase the impact of species on surface water resources,” said first author J. Tyler Fox of Charlotte, North Carolina, a wildlife conservation doctoral student in the College of Natural Resources and Environment.

“Our findings have important implications to land-use planning in southern Africa’s dryland river ecosystems,” said corresponding author Kathleen Alexander, associate professor of fish and wildlife conservation in the college and a Fralin Life Science Institute affiliate. “Maintaining sufficient access for water-dependent wildlife along riparian areas in dryland regions may not only be part of a sustainable conservation strategy, but may also be important for securing clean water and improved human health.”

The National Science Foundation-funded study was conducted in the dryland Chobe River system in Northern Botswana, the only permanent surface water for humans and animals in the region. A dominant feature of this landscape is Chobe National Park, which provides critical habitat for the largest elephant population in Africa, as well as a host of other wildlife species. The study area also included two towns and mixed-use land area where a limited number of subsistence farming enterprises are located.

The research team evaluated water quality dynamics over a three-year period in the Chobe River, which spans a mosaic of protected, urban, and developing-urban land-use areas. Patterns of water quality decline were compared to animal densities, both domestic and wildlife species, fecal counts along the riparian zone, and land characteristics.

Fox and Alexander report that significant relationships were found in the dry season between increased concentrations of Escherichia coli (a common bacteria from the gut of humans and animals), flood plain habitat, protected land use, and fecal counts from elephants and other wildlife along the banks of the river. Dry-season terrestrial fecal densities were also important predictors of E. coli concentrations in the following wet season, underscoring the longer term influence of terrestrial fecal loads.

In contrast to the dry season, wet season E. coli was only associated with suspended solid matter in the water, suggesting storm water and sediment runoff may significantly influence E. coli loads during that season.

Alexander demonstrated in previous research that recurrent diarrheal disease outbreaks in children and adults in the Chobe District coincided with the timing of flooding in the Chobe River and peak rainfall periods. “The results of this and other studies suggest that one-health approaches that include consideration of the environment are necessary to understand the complex dynamics that link humans, animals, and the environment to resultant health outcomes,” Alexander said.

“Surface water quality declines are typically associated with human habitation and landscape change, such as agriculture, livestock husbandry, industry, and urban development,” Fox explained. “But our results suggest that these expectations may not hold true in areas where wildlife populations concentrate at high densities along perennial dryland systems such as the Chobe River.”

“Activities of elephants and other large animals play an essential role in maintaining the long-term integrity of river corridors in southern Africa, adding nutrients and increasing patch heterogeneity of the riparian landscape. In areas where wildlife concentrate in riparian corridors, however, this influence may extend beyond the terrestrial environment to impact seasonal water quality dynamics,” he added.

The article notes that the lack of surface water sources in the region during the dry season constrains water-dependent wildlife species to forage within relatively short distances from the river. While many species of browsers and grazers use the Chobe River and floodplain during the dry season, the new research data show that elephants contributed disproportionately to fecal loading within the riparian corridor.

While human landscape modifications and pollution are most often associated with water quality declines, this work highlights the potential impact of wildlife on surface water resources when access is limited. The researchers recommend that future land use and development planning in the Chobe District and other dryland regions of southern Africa consider impacts of landscape alteration on wildlife movements and access to surface water.