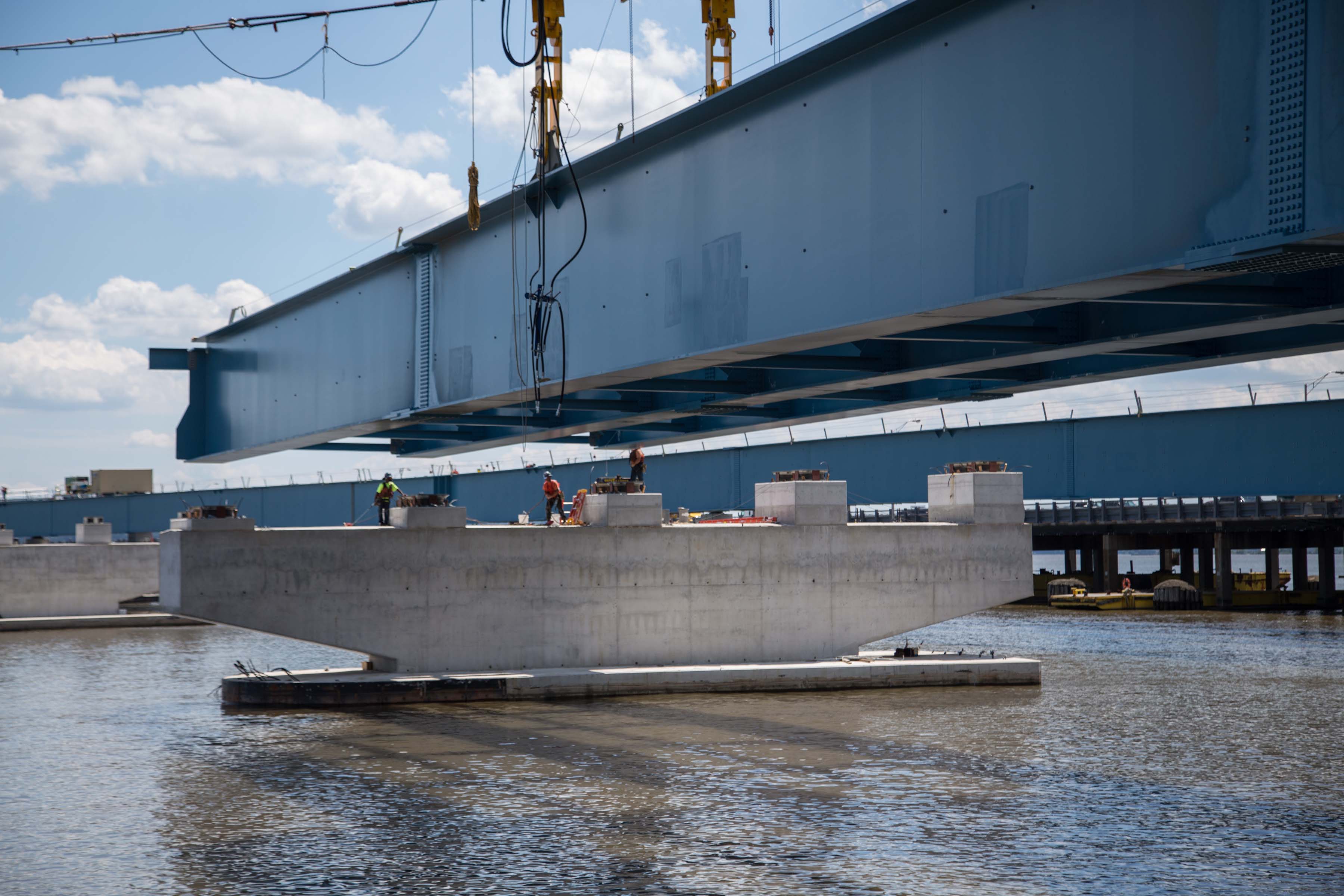 After connecting individual beams into a girder assembly on land and rolling it on a specially-designed track system just east of the abutment, TZC will literally push the assembly west over the railroad tracks toward the first pier in the river. As the operation progresses, additional girders will be connected to the assembly and pushed further westward.

After reaching the first pier, which is located on land, the three girder assemblies will continue westward, crossing over the Metro-North Railroad Hudson Line tracks until the assemblies reach the river pier. TZC is closely coordinating the effort with Metro-North, ensuring that the operation will maximize safety for both workers and the public and minimize impacts to Metro-North rail service.

While the entire operation is anticipated to take approximately three months, work over the Metro-North tracks will occur during three Friday overnights, one each month: the first on October 23, and the remaining dates in November and December to be determined. Metro-North will adjust its schedule slightly on those nights to allow the work to be completed. Advance notice of the specific nights will be announced to help Metro-North riders plan accordingly. TZC will suspend construction activities when trains pass through the area, resuming when given the “all clear” instruction by Metro-North.

Across the river, TZC also will continue installing steel girders near the South Nyack shoreline. Safely accomplishing the work will require reducing River Road to one lane during weekdays between 6 a.m. to 5 p.m. Flag persons will keep traffic moving by alternating the directional flow between north and south.

Smaller girder sections will be lifted into place by cranes from the Rockland trestle in South Nyack. Ironworkers then bolt together the girders and cross beams that will support the new bridge’s concrete road deck. In deeper water, the I Lift NY super crane will continue placing larger girders, averaging two placements a week. A total of 31 miles of steel girders cumulatively weighing more than 100,000 tons will be installed for the new twin-span bridge.

Tower Construction
Construction will continue on the new bridge’s iconic towers, which will eventually rise 419 feet above the river. Innovative self-climbing jump forms enable TZC workers to build the towers in segments that progressively “jump” up from the foundations to their full height. Within the jump forms, workers assemble steel reinforcement cages that are then encased in concrete, one segment atop the previous one and so on. Eight towers will be constructed on the project’s football-field-long main span pile caps over the coming year, as seen in this animation.

Installation of Noise Barriers in South Nyack
Next week will see continued installation of foundations for noise barriers along the southbound Thruway between the South Broadway bridge and River Road in South Nyack. The work involves drilling holes into the soil to install the foundations. After the foundations are installed, concrete panels that form the noise barriers will be installed. The barriers will be treated with sound-absorbing material to further reduce traffic noise to the nearby community.

The U.S. Coast Guard has established a Safety Zone surrounding 16 construction barge mooring locations at the project site. No unauthorized vessels are allowed in the Safety Zone. In addition, marine law enforcement will be enforcing the rules of the expanded Regulated Navigation Areas (RNAs) east and west of the Safety Zone. The RNAs stretch 500 yards north and 500 yards south of the existing bridge. Boaters are urged to transit the main channel with no wake at a maximum speed of 5 knots and to use extreme caution on the river at all times.

More New NY Bridge boater safety information, including the U.S. Coast Guard Notice to Mariners and construction site maps, can be found here atNewNYBridge.com. An interactive map showing vessel locations on the Hudson River is also available here for recreational and commercial boaters to get updated information on the very active construction zone. The GPS tracking map is for informational purposes and not intended for navigation.

Mariners also should be aware that TZC will continue work in the vicinity of the side channels under the existing bridge. Additional temporary navigational lights have been installed to further define the 600-foot navigation channel under the main span. Permanent elements of the new bridge are lit per U.S. Coast Guard requirements, as are all moorings, barges and other equipment.

All lane closures are subject to change due to traffic, weather or emergency situations. Please visit http://www.thruway.ny.gov/travelers/map/ for real-time information regarding traffic conditions.