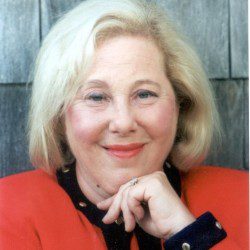 Rosabeth Moss Kanter is a professor at Harvard Business School as well as the chair and director of the Harvard University Advanced Leadership Initiative, which helps successful leaders expand their skill and influence to national and global challenges. Kanter has written several bestselling business books on leadership, and she recently penned MOVE: Putting America’s Infrastructure Back in the Lead. She has received many accolades for her writing and research on management and sociology, including being named one of the “125 women who changed our lives over the past 125 years” by Good Housekeeping magazine.

The Harvard University Advanced Leadership Initiative is a cross-disciplinary effort that spans the entire university to help build a new leadership force for the world by engaging and empowering successful leaders. This aligns neatly with the U.S. Competitiveness Project that focuses on strengthening America.

We can’t just fix potholes. We need to reinvent infrastructure for the 21st century.

“A group of us began assessing various aspects of U.S. competitiveness, which means the ability to meet world standards and create a strong economy with prosperity for all citizens,” says Kanter. “My part of the effort was to look at the ecosystem and how we support, create and promote jobs. So I looked at innovation and how ideas get commercialized and skills get built and so forth. There was one missing piece in all of this, and that was infrastructure.”

The three R’s in infrastructure are repair, renew and reinvent. Kanter asserts that we need to put more emphasis on reinventing every time we renew, so we continue to improve and iterate a better infrastructure through time.

“I don’t see why we’re not putting more sensors in roads automatically when they’re rebuilt,” she says. “The potential lies in wireless connections, so the roads tell you when they need to be repaired and when they’re too icy, and they can give information that can divert traffic. The potential for infrastructure of the future is enormous.”

Kanter’s work on the importance of efficient infrastructure progressed from a series of conversations to a summit with top thinkers from around the globe and then to a book. The issue resonated with her on multiple levels, from the need to innovate and change how we do things to addressing a deficit that degrades the image of America in the eyes of the world.

“I got motivated by the magnitude of the problems and how many business leaders felt that it was getting worse rather than better,” notes Kanter. “I got motivated by the exciting future opportunities with new business models, new public-private partnerships and new ways for people to invest. I have also gotten motivated around new technology to reinvent how we move.”

Infrastructure is a significant system-change problem, because it’s not owned by any single organization, and it requires binding consensus where there often are conflicting goals and multiple stakeholders. As such, it’s a difficult problem to turn around, yet it’s vital to the country’s future.

“You begin to lose competitiveness if infrastructure is bad,” she adds. “You hurt your own population, you limit opportunities, and you also discourage foreign companies from locating in the United States.“

The United States is increasingly turning to private investors to put up some investment money, primarily for greenfield projects. Such lease agreements, and not outright privatization, are necessary to accelerate responses to the problem, but they’re not the sole answer for funding.

“We spend a lot of time talking about either public or private investment, and it really should be both,” adds Kanter. “The public sector will always be important to set standards and ensure involvement of stakeholders in setting priorities. There also aren’t enough private investors, and they don’t always make the smartest decisions. With the right type of collaboration, public-private partnership can work very well.”

There’s a growing sense of urgency to address the infrastructure deficits in the United States. Kanter’s focus on leadership as the problem, first and foremost, gives hope that a vision and motivators will take hold to impact change.

“I think we have to be more sophisticated and nuanced with our approach,” says Kanter. “We first funded the interstate highway system under the defense umbrella. We can’t use defense within our borders as a rationale any more. Instead, we should focus on the opportunity for the future with a strong economy, access to jobs, prosperous citizens and high quality of life. We need to switch our story.”