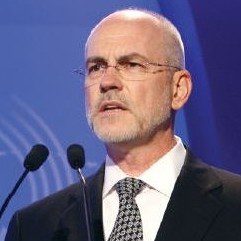 John Williams is chairman and CEO of Impact Infrastructure, a company that has built tools to quantify costs and benefits of all types of infrastructure investment, including buildings, energy, water systems, bridges, highways and stormwater systems. This work is derived from a career filled with successful projects as past president and largest shareholder of HDR Engineering. Williams’ team is involved in the full lifecycle of these projects and understands what it takes to get them planned, permitted, financed, constructed and operating. They also develop in-depth reports to justify project benefits.

Impact Infrastructure developed AutoCASE, a cloud-based analytical engine that applies Cost-Benefit Analysis to infrastructure projects by evaluating project performance for social, environmental, and economic impacts and benefits (the “triple bottom line”). The analytical approach isn’t new, but by using the cloud and investing heavily in data and analytical tools, the company introduced automation that dramatically reduces the cost and speed in which such analysis can be executed.

“Back when we were in the custom business-case-analysis business, we would only do them for very large projects ($500 million and above). The reason is that each triple-bottom-line run would cost $50,000 to $100,000 dollars,” says Williams. “[Now] we’re dedicated to bringing comprehensive high-level economic analysis to the ‘run-of-the-mill project’ (projects from $5 million). Instead of costing $50,000 per run, we can do a limitless number of analysis runs on each project for less than one percent of the cost of a single economic analysis run done the old-fashioned way.”

Williams was invited to become a member of the Clinton Global Initiative (CGI) in 2008. Members must be global thought leaders with a commitment to action—doing something new, big, memorable and aligned with CGI’s priorities of global health, education, energy and the environment. Williams’ commitment to action was to create the Sustainable Return on Investment (SROI) framework in 2009, building on work he already was doing to quantify project benefits.

In February 2010, Williams was diagnosed with Large B-Cell Non-Hodgkins Lymphoma, a very aggressive form of cancer. Fortunately, it was caught early, and he credits Memorial Sloan Kettering in New York for sparing him from an early death.

“I started asking myself if I was spending the days, months and years that I’ve been gifted doing what I’m supposed to be doing with my life and resources,” adds Williams. “I came to the conclusion that I was spared to create a wave of social change that comes from making really good infrastructure investment decisions, and I founded Impact Infrastructure with several of my co-creators of the SROI framework.”

The SROI framework’s approach is to represent value of previously intangible items, asserting that everything can be measured and stated in monetary units.

“If you spend $4 billion dollars on the Hudson River Crossing next to the Tappan Zee bridge here in New York, that new bridge will be in use for 50 to 100 years,” notes Williams. “If the decisions you made constructing that bridge were good ones, then you can expect 50 to 100 years of benefits to accrue as a result. The public benefit has a value that can be stated in dollars. Not just the financial benefit of toll revenues, but the benefit by way of regional economic growth or environmental benefit such as a minimized disturbance to the bottom of the Hudson River.”

The analysis engine is hoped to become a natural extension of thinking by simplifying access and speeding the process. Making it easy allows designers to factor in many more inputs to decision making.

“Just as a designer of a bridge will analyze steel vs. concrete, shouldn’t they also analyze the triple-bottom-line performance of those solutions?” asks Williams. “If you choose to go to longer spans, what is the performance of longer spans, and how might that performance benefit be allocated across a group of different stakeholders? The bridge owner wants to know what’s in it for them as does the financiers or funders, the host community, the taxpayers and finally the environmental community. AutoCASE tools provide the triple-bottom-line reporting and then subdivide that for each of these communities.”

In addition to introducing triple-bottom-line thinking to planning and design, the intent is to offer analysis for infrastructure’s full lifecycle.

“You can run a triple-bottom-line analysis at conceptual, preliminary and final design as well as project construction, commissioning or long-term operations,” adds Williams. “You can run it every time you make a decision about the project at no additional cost.”

Impact Infrastructure received investment from Autodesk that’s leading to direct integration of its AutoCASE analytical engine within Autodesk products such as InfraWorks and Civil 3D. Such seamless integration provides two-way communication, with Impact Infrastructure harvesting the intelligence in the model, and designers having the ability to run reports for elements of their design as they design, so they can understand and finetune triple-bottom-line benefits.