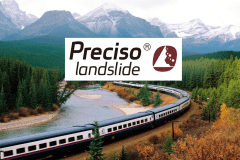 How to detect and monitor landslides and instability risks over urban areas, large infrastructures and the territory around it, in order to prevent disasters?

Planetek Italia has set up Preciso landslide, a new monitoring product, based on satellite data, to periodically provide information about infrastructures stability and landslides that could affect buildings, highways, railways and other critical infrastructure.

Preciso® landslide will be showcased in October at two international events. The ITS Congress and Exhibition (Bordeaux, France, 5-9 October 2015), the world’s largest event in intelligent transport systems and services (ITS), and the Expert Meeting iObčina/iKomunala 2015 (Laško, Slovenia, 8 October 2015), an event specifically dedicated to Slovenian public administrations and governments.

At the ITS Congress and Exhibition, Planetek Italia is among the 22 European companies selected by the JUPITER consortium to take part in the EGNSS Application Village (JUPITER booth) and to organize, together with the GSA (the European GNSS Agency), with Local Authorities and other SMEs, a rich agenda of meetings and events. The purpose of the consortium is to contribute at demonstrating the benefits that space can bring to ITS applications.

At the Expert Meeting iObčina/iKomunala 2015, organized by Kaliopa d.o.o., a Slovenian partner of Hexagon Geospatial, Planetek Italia will showcase how Preciso landslide exploits satellite data taken from Synthethic Aperture Radar (SAR) to measure sub-centimetric movements on the ground, and to provide periodical update of landslide movements over large infrastructures or urban areas.