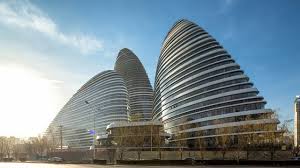 Hamburg, Sep 29, 2015 – The winner of the world’s most renowned architecture prize for skyscrapers, the Emporis Skyscraper Award, is finally official: The building complex Wangjing SOHO in Beijing was chosen by an international panel of experts from more than 300 skyscrapers of at least 100 meters’ height and which were completed during the previous calendar year. The award, given by Emporis (www.emporis.com), the international provider of building data, is now into its fifteenth year.

Winner Wangjing SOHO, consisting of three unique skyscrapers with a height of 118 meter, 127 meter and 200 meter each, impressed the jury by its excellent energy efficiency and its distinctive design, which gives the complex a harmonious and organic momentum. The soft and fluid forms were designed by Zaha Hadid Architects, making Wangjing SOHO an architectural landmark of the metropolis Beijing.

Second-placed Bosco Verticale (“vertical forest”), however, stands out through its “green” architecture, which marks a milestone in the field of sustainable construction. The facade and balconies of the two towers designed by Boeri Studio are covered with more than 700 trees and 90 different species of plants, which help to reduce smog and attenuate noise, while simultaneously producing oxygen and controlling the temperature inside the 105 meter and 78 meter tall towers.

The expert jury voted Tour D2 in Courbevoie into third place. Its elegant shape is defined by an external diagrid structure that spans the 171 meter tall oval tower in full height: The extravagant diamond design gives the skyscraper its characteristic appearance and makes the facade sparkle in the sunlight. On the roof, the steel mesh merges together to form an imposing dome above what is called the “Cloud Garden”, a 500m2 large green oasis in the heart of the business center.

Although often represented in the Top Ten, Wangjing SOHO is the first time China manages to take the crown, since the Emporis Skyscraper Award was established in the year 2000. Surprisingly there is not a single Canadian building among the winners this year, even with Toronto being one of the cities with the most new high-rise and skyscraper projects. Nevertheless, there is cause for celebration for North America: After the United States – the cradle of high-rise architecture – had been left empty handed two years in a row, this year two projects from New York made it into the Top Ten of the sought-after architecture prize.

When choosing the winners, height records hardly play any role. Hence, only three “supertalls” (skyscrapers with a height of at least 300m) made it to the Top Ten this year. Instead of following the principle of “Bigger, Higher, Faster”, the jury put its emphasis on other qualities: “The results of recent years clearly show that criteria such as sustainability, efficiency and a clever design play a much more important role than reaching new superlatives”, says Daniel Schuldt, Emporis’ managing director.