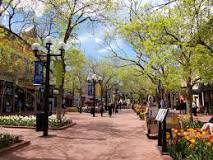 As part of National Community Planning Month, APA’s Great Places in America program recognizes streets, neighborhoods, and public spaces in the United States demonstrating exceptional character, quality, and planning—attributes that enrich communities, facilitate economic growth, and inspire others around the country. The Great Neighborhoods, Great Streets, and Great Public Spaces of 2015 are places that are unique and exemplary in their amenities and infrastructure, cultural identity, and use of sustainable and innovative practices.

“Public spaces are essential as gathering places and recreational venues in our communities, and designing them to be innovative, multifunctional, and culturally beneficial requires thoughtful collaboration and planning,” said Carol Rhea, FAICP, president of APA. “The Great Public Spaces of 2015 illustrate how to effectively create spaces that enhance the lives of residents and visitors alike, and we commend them on this tremendous achievement.”

Since launching the Great Places in America program in 2007, APA has recognized 245 neighborhoods, streets, and public spaces around the country. Places are selected annually and represent the gold standard in terms of having a true sense of place, cultural and historical interest, community involvement, and a vision for the future.

For the second year in a row, members of the public will have the opportunity to suggest an additional favorite public space, neighborhood, or street to earn a “People’s Choice” designation. During the first half of October, individuals can offer suggestions via APA’s social media channels using the hashtag #greatplaces. APA will then select five finalists, after which the public can visit APA’s website to vote for a favorite. APA will announce the “People’s Choice” winner in early November 2015 and promote the winner on the APA website and through social media outlets, as well as host a local celebration.

The four blocks of Boulder, Colorado’s, Pearl Street Mall have served as a central, multi-purpose commercial and community space for the city for over 100 years. In the 1960s and 1970s, as the city doubled in size and crime rates began to rise, the Boulder City Council developed a plan to revive downtown and preserve its historic charm, establishing Pearl Street Mall in 1977. The city closed the area to automobile traffic—creating a pedestrian gathering place for shopping, dining, arts, and entertainment—and has worked to maintain both the character and economic vitality of Pearl Street Mall with fixed architectural and design standards, as well as incentives for small businesses on the mall. The space features a variety of locally owned stores, restaurants, small gardens, street performers, and public art—including a children’s sandbox play area, sculptures, and fountains—and is one of Boulder’s most popular nightlife destinations. Pearl Street Mall hosts Bands on the Bricks, an annual summer concert series; the Boulder Asian Festival, an arts, crafts, food, and music showcase of Asian and Pacific Islander culture; and the Pearl Street Stampede, aFriday night event preceding University of Colorado football home games, during which hundreds of fans line the street to cheer on the team to the university marching band. Tourists, residents, and students alike come to Pearl Street Mall for its walkability, lively atmosphere, and diverse mix of retail and entertainment options. To learn more, click here.

The Flint Farmers’ Market has been in operation since 1905 and in recent years it has revitalized the City of Flint, Michigan, and become a centerpiece of the surrounding community. The original Flint Market was held downtown but was moved to the banks of the Flint River in 1940 because of the congestion it caused in the city. It moved back downtown in 2014 into the former Flint Journal printing facility to accommodate 50 vendors selling a variety of local goods. In warmer months, an outdoor pavilion space hosts 25 produce and flower vendors, along with art and craft merchants. Apart from energizing the local economy and bringing the community together, the modern Flint Farmers’ Market is also critical to marginalized groups in the area who through the market have access to healthy food choices and several vendors who accept SNAP (Supplemental Nutrition Assistance Program) cards and Double Up Food Bucks, a Michigan program assisting low-income residents in purchasing fresh produce. To learn more, click here.

A once-active railroad hub, the historic Railyard property fell into neglect with the decline of rail activity. In 1995, the City of Santa Fe stepped in to ensure that development of the Railyard would preserve its character and historic significance by purchasing 50 acres and embarking on a 16-month in-depth, community-based planning process to create a plan for the land. The re-envisioned Railyard that opened to the public in 2008, as detailed in the city-approved Railyard Master Plan, is the product of a successful public-private partnership and investments totaling over $140 million. It features a sprawling pedestrian landscape with abundant public spaces, ample parking, multiple modes of transportation, and environmentally sound design. The revitalized Railyard also incorporates green infrastructure, such as an iconic water tower feature that serves as a water harvesting system for the Railyard’s plants and gardens, and award-winning landscape design to create a welcoming gathering place for both residents and visitors. The North Railyard area hosts the flourishing Santa Fe Farmers’ Market, with over 150 vendors offering diverse agricultural products; craft fairs; a local Fine Arts Market; live concerts; school reunions; pop-up movies; the eclectic Violet Crown Cinema; and number of art galleries, restaurants, pubs, and offices. To learn more, click here.

Houston’s Hermann Park spans 445 acres and adjoins Rice University, Texas Medical Center, and several other Houston neighborhoods and destinations. The park’s attractions include the Houston Zoo, Houston Museum of Natural Science, McGovern Centennial Gardens, the Japanese Garden, Miller Outdoor Theatre, Hermann Park Golf Course, McGovern Lake, Jones Reflection Pool, Buddy Carruth Playground for All Children, and miles of pedestrian and bike trails, as well as miniature train rides, pedal boats, and multiple BCycle bike rental locations. Hermann Park’s Brays Bayou area, planned as part of the city’s Bayou Greenways Initiative, features the 290-foot suspension Bill Coats Bridge, which links pedestrians and cyclists from surrounding neighborhoods to the park and helps to manage floodwaters. While the park experienced several setbacks in its development, it has seen $100 million in renovation and new amenities in recent decades through the help of the citizen organization Hermann Park Conversancy (previously known as Friends of Hermann Park), in partnership with Houston Parks and Recreation, and landscape architect Laurie Olin. By commissioning a new master plan for the park in 1993, these entities were able to transform the once-neglected park into a thriving civic, educational, and entertainment center for the city that now hosts approximately six million visitors each year. To learn more, click here.

The 1,200 acres of San Diego’s Balboa Park, located just north of downtown, have been San Diego’s flagship public space for more than 100 years and have come to represent the recreational heart of the city. Over its long history, Balboa Park has been used for a diversity of purposes—such as the 1915 and 1935 Panama–California Expositions, training ground for the U.S. Navy during World War I, and various public events and cultural institutions—and today, it is home to the world-famous San Diego Zoo, 15 museums, multiple indoor and outdoor performance spaces, gardens, dog parks, trails, and restaurants. Initially established as “City Park” in 1868 without any landscaping or development, Balboa Park has evolved with San Diego itself, first with the early plans that brought in trees and shrubs, and later with water systems and roads that transformed Balboa into a multi-faceted urban park. Some of the park’s events and attractions include California Tower tours at the San Diego Museum of Man, the December Nights holiday festival, weekly organ pavilion concerts, and the annual EarthFair, the largest free environmental fair in the world. Opened in January 2015 and scheduled to end in July 2016 is San Diego Invites the World: The 1915 Expo, a commemorative exhibition of the original exposition showcasing commerce, arts, and industry from that era and the exposition’s role in San Diego’s history. To learn more, click here.

Opened in 2004, the 24.5-acre Millennium Park, with its vast performance space, unique public artwork, and year-round gardens, is Chicago’s urban gathering place and cultural center for both locals and tourists. Once the site of an industrial wasteland of railroad tracks and parking lots, Millennium Park was transformed into a world-famous destination after then-Mayor Richard M. Daley announced a plan to repurpose the abandoned industrial space in 1997. The park’s centerpiece is the Frank Gehry-designed Jay Pritzker Pavilion, an outdoor concert venue seating 4,000, surrounded by a Great Lawn that accommodates an additional 7,000. The park also features the iconic “Cloud Gate” sculpture—commonly known as the Chicago “Bean”—designed by Anish Kapoor; the “Crown Fountain” designed by Jaume Plensa, an interactive artwork of water, light, video, and glass; and the Lurie Garden, a four-season urban oasis with grasses, perennials, and other greenery available for public enjoyment. Studies estimate that Millennium Park has increased nearby residential development values by $1 billion and driven Chicago tourism revenue by over $1.2 billion. To learn more, click here.

For more information about these public spaces, as well as APA’s top four Great Neighborhoods and top five Great Streets for 2015 and previous years, visit www.planning.org/greatplaces.

The American Planning Association is an independent, not- for-profit educational organization that provides leadership in the development of vital communities. APA and its professional institute, the American Institute of Certified Planners, are dedicated to advancing the art, science and profession of good planning — physical, economic and social — so as to create communities that offer better choices for where and how people work and live. Members of APA help create communities of lasting value and encourage civic leaders, business interests and citizens to play a meaningful role in creating communities that enrich people’s lives. APA has offices in Washington, D.C., and Chicago. For more information, visit www.planning.org.