/ Feature / Crystal River Works to Save Manatees and the Local Economy

Crystal River Works to Save Manatees and the Local Economy 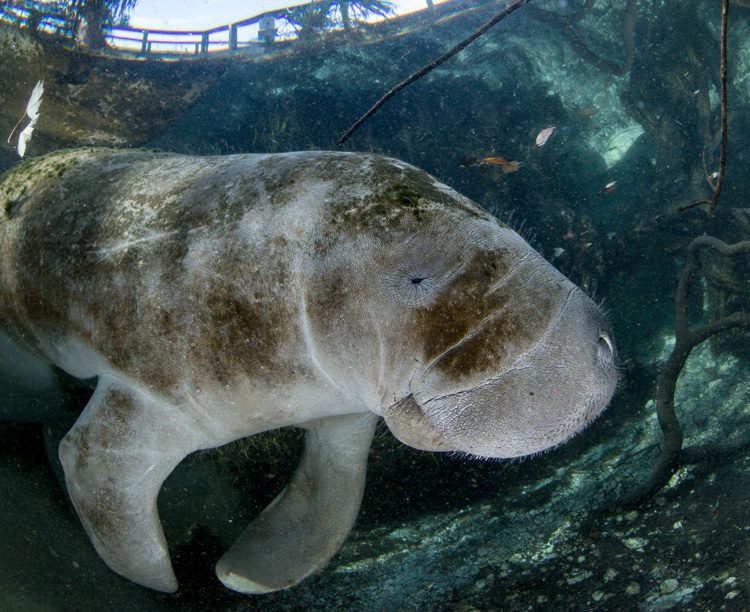 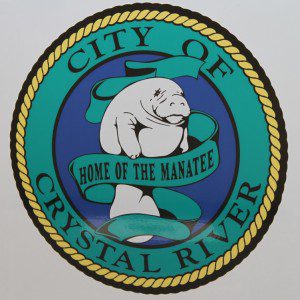 Crystal River, Fla., is the self-proclaimed “home of the manatee.” An estimated 300,000 tourists visit Crystal River each year, many of them to see and experience the graceful manatees, the giant herbivores often referred to as “sea cows.” For a town with a population of only 3,100, such an influx of people represents an important economic boon for everyone in the area.

The geography and ecology of the Crystal River region is perfect for manatees, which often weigh up to 1,300 pounds. Because of their low metabolic rate, they can’t tolerate water temperatures below 60 degrees Fahrenheit, so as the gulf waters cool in autumn, the manatees migrate to warmer environments. The city of Crystal River is located on Kings Bay, which is connected to the Gulf of Mexico by the Crystal River, designated a “Florida Outstanding Waterway.” Kings Bay, about five miles inland, is fed by numerous small and large springs and maintains a year-round temperature near 72 degrees, which is perfect for manatees and tourists. The estimated winter count of manatees in Kings Bay is about 700—more than 13 percent of the Florida manatee population, according to recent studies.

The iconic manatees, pleasant climate, scenic beauty and fishing afforded in Crystal River make it a haven for outdoor enthusiasts and snowbirds. The economy is built on naturalism and tourism, so when it became apparent the local ecosystem was being threatened by pollution, community leaders acted decisively to “clean up their act” and reverse the tide of degradation. They took a thorough approach and addressed several problems that were polluting their waterways. Today the bays, springs and rivers in the area are on the mend, the manatees are content, and the tourists just keep coming.

The story of Crystal River’s environmental awakening began more than 10 years ago and involves several related initiatives. Not long after the turn of the millennium, the Florida Department of Environmental Protection discovered that Kings Bay was becoming “nitrogen impaired.” The abundance of nitrogen in the water was causing abnormal algae blooms. The particular type of algae in Kings Bay is called Lyngbya, a fibrous algae that threatens the natural habitat of the manatee and other aquatic life in the bay.

“The algae growing in Kings Bay floats at the surface for a few days and then settles to the bottom to form a mat that contains high concentrations of nitrogen,” says David Burnell, Crystal River’s city manager. “This mat, which can be six inches to four feet thick, prevents the normal growth of sea grass and other vegetation that manatees like to eat. It destroys their natural habitat and will eventually cause the manatees to die off. It’s also harmful to other aquatic life.”

Biologists have known for some time that high levels of nitrogen in surface waters often are the result of human waste, sometimes caused by an abundance of nearby septic tanks or leaky sewers. Other major contributing factors may include animal waste and fertilizer runoff. If these nitrogen sources are eliminated, the water will likely stabilize, and algae growth will subside. Mother Nature will restore the water to a healthy balance, and the local aquatic life will again thrive.

“We’re a waterfront community that has been blessed with natural environmental beauty,” notes Burnell. “We have to solve our environmental problems to remain economically viable. We didn’t just address the septic-tank issue, we also changed fertilizer ordinances. We repaired gravity sewers to prevent leaks, and we partnered with Duke Energy to use reclaimed water at their plant to help protect the local aquifer. For a small community, we spent a lot of money, and now we are seeing positive results.”

An important step in the Kings Bay restoration effort was a two-phase vacuum-sewer installation. The project’s goal was to rid the area of nearly 600 aging septic tanks that were contaminating groundwater and contributing to nitrogen buildup in the bay. Many of these tanks weren’t located within the city of Crystal River, but rather in Citrus County, so a lot of cooperation between city and county governments was required.

“The vacuum-sewer projects were actually in the county, not the city of Crystal River,” explains Burnell. “The city had the ability to receive a grant that was unavailable to the county. The city was eager to do this project, because a septic-tank abatement program would affect the water quality in Crystal River. It was mutually beneficial.” 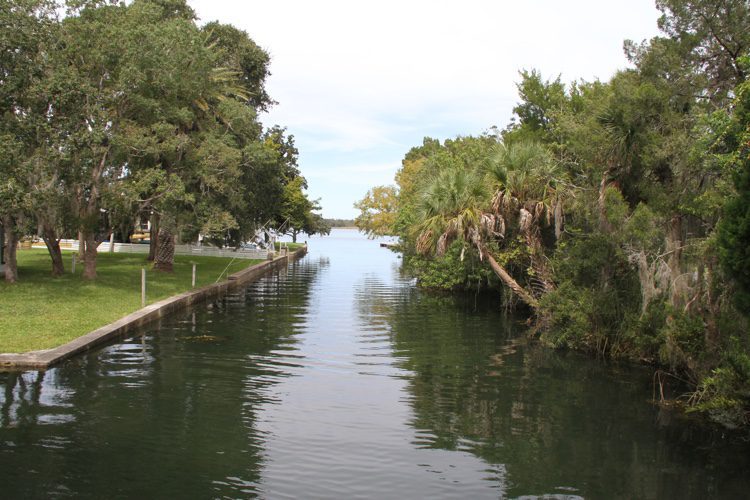 Burnell said about 85 percent of the construction work was funded by grants; the remaining 15 percent is covered by a 10-year assessment of county residents, which was met with mixed reviews when first presented to property owners.

“We had a number of townhall meetings, and most of the public’s concerns were addressed at these meetings,” notes Alan Garri, P.E., an engineer with Greenman-Pederson Inc. (GPI) in Ocala, Fla., which was hired to complete the design and manage construction of the vacuum-sewers project. “We explained what we wanted to do and why, and how it would benefit property owners and property values. Most people went from being opposed (to the project) to supportive. A lot of folks were dealing with septic systems that were in disrepair, so they understood the benefit of having a new sewer system. For the most part, the initiative was well received.”

Although the need for a new sewer system was generally acknowledged, the concept of installing vacuum-sewer technology was met with reluctance by taxpayers and local public-works officials.

“I didn’t know what a vacuum sewer was when I got here in 2010,” admits Burnell. “In topography like ours, it makes a lot of sense. If I were developing infrastructure for our entire city from scratch, I would likely choose vacuum sewers.”

In Crystal River, as in many coastal communities, the water table is high and the terrain very flat. Gravity sewers require sufficient grade or multiple lift stations to move wastewater. This can mean digging deep trenches, dewatering, and a lot of disruption for home and business owners. The cost of installing a gravity sewer to serve the citizens with septic tanks was prohibitive, so engineers began looking for alternatives. 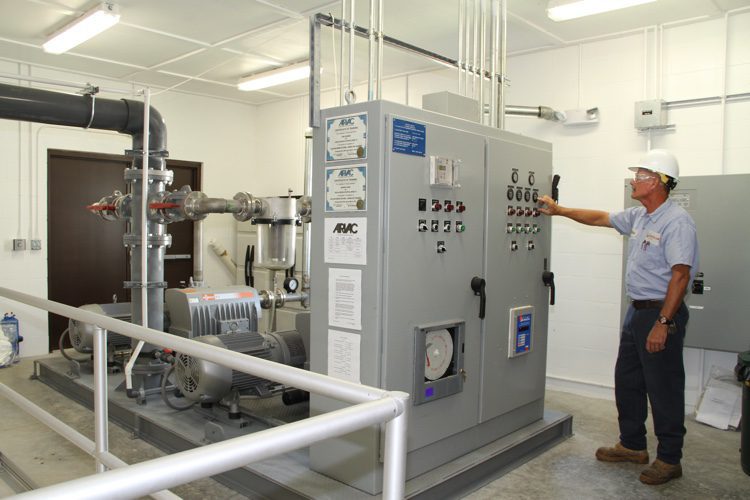 “The original engineers for this project looked at low-pressure systems (grinder pumps), gravity sewers and vacuum-sewer technology. They chose vacuum sewers, because it was more cost effective,” says Garri. “Vacuum technology allows you to lay the sewer collection lines in shallower trenches. Plus, we can operate the entire system with only two vacuum stations. We would have needed multiple lift stations for a gravity sewer, so the operations and maintenance costs would be higher.”

There was some reluctance to vacuum sewers, because vacuum technology hadn’t been utilized in this region of the state before. Engineers and public-works personnel turned to AIRVAC for advice and support. “AIRVAC has been great to work with,” adds Burnell. “They provided instruction and testing during the installation, and excellent training on how to operate and maintain the system.”

Garri, who began working on the project in 2008, worked with AIRVAC personnel to fine-tune the system’s design prior to construction, which occurred in two phases. It was his first experience with vacuum sewers.

“One of the interesting things I learned about vacuum sewers is that they are gravity assisted,” Garri notes. “The collection lines have a sawtooth profile. Vacuum pressure in the lines assists gravity to help move sewage slugs along to the treatment plant. This type of innovative design allows for the vacuum sewer mains to be installed at a much shallower depth than gravity sewers. The sawtooth profile also allows vacuum pumps to operate more efficiently than traditional force-main or grinder pumps, due to gravity assistance. These characteristics really reduce maintenance costs in the long run.”

Garri also explained that a grinder-pump system was ruled out because the individual grinder pumps would have been located on each individual’s private property, creating an access nightmare for public-works personnel. The valve pits for the vacuum sewer are located in the right of way, so there are no access issues.

Vacuum sewers also presented another significant benefit: they don’t leak. Collection lines maintain constant vacuum pressure, so there’s no infiltration or exfiltration; no sewage escapes into the environment, and no groundwater enters the collection system. If a leak occurs, it can be quickly located and isolated, and because the lines are in shallow trenches, repairs can be made quickly with no large excavation equipment. 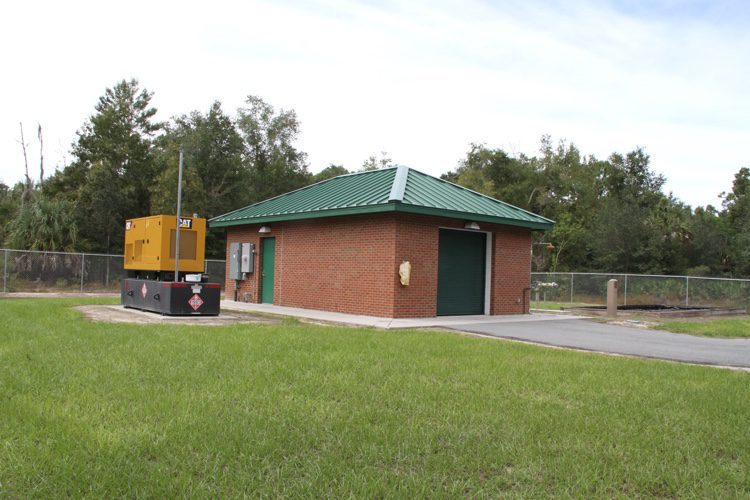 This vacuum station is equipped with a backup generator in the event of power loss due to hurricanes, tropical storms or severe thunderstorms.

Installation of the vacuum sewers began with the construction of two vacuum stations in residential areas. The stations emit no odors and were designed to blend in architecturally with the surrounding homes. “When you drive up to them, they look very much like houses,” notes Garri.

Two collection lines proceed outward from each vacuum station. The lines were tested each night to ensure they would maintain vacuum pressure, and AIRVAC sent engineers periodically to answer questions and help solve minor installation problems. Shallow trenches dug by small excavators allowed the crews to work with little disruption to the neighborhoods.

The first of two phases went online about three years ago. Much of phase two went into service 18 months ago. Veolia Water Technologies Inc., a water and sewer-management company, maintains the city’s wastewater system and was tasked to maintain the new vacuum sewer.

“I was a little apprehensive at first,” says John Morris, Veolia’s field supervisor in Citrus County. “I had experience with gravity sewers and low-pressure grinder systems, but vacuum sewers were totally new to me.”

AIRVAC provided training at the company’s Rochester, Ind., headquarters as well as some onsite training in Crystal River. Now, after three years of comparison, Morris says vacuum technology is his preferred sewer-conveyance system. “If I had one choice for sewers, I’d choose vacuum sewers,” he notes. “It gives me the least amount of problems of the three sewer systems I work on. Vacuum sewers are easy to maintain, and AIRVAC supports us very well.”

Morris said his daily vacuum-sewer routine typically begins with about 15 minutes at each of the two vacuum stations. A quick check of the gauges and routine maintenance is all it takes. If vacuum pressure is lost anywhere in the system, it typically shows up at the vacuum station. “If we ever have any problems, they are usually very easy to fix,” he notes.

Morris also appreciates that with vacuum sewers he never comes into contact with raw sewage. He also likes that vacuum pumps are easily accessible, and there are no confined spaces to deal with, as with gravity sewers. He notes that vacuum stations have emergency generators that kick in when power is lost, so there’s never a disruption in sewer service. There are only eight emergency generators to serve the city’s 67 lift stations, so power outages cause significant disruption to service for gravity and low-pressure systems. 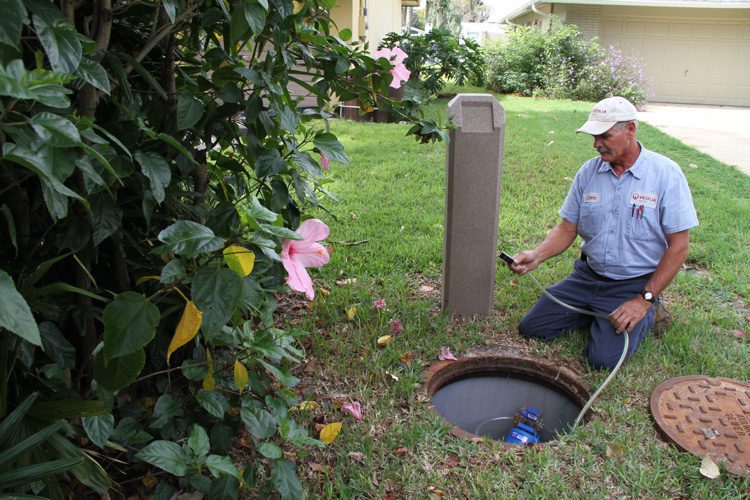 Today, it’s clear that Kings Bay is on the mend. “We are now trending in a positive way with regard to nitrogen,” adds Burnell. “Our waters are now very close to dropping below the nitrogen-impairment level.”

No single solution led to this improvement. Removing hundreds of septic tanks helped, as did relining much of the city’s leaky sewer system and instituting new regulations on fertilizers. The combined effect has been to significantly reduce the amount of nitrogen entering the local waterways and groundwater. That’s excellent news for local residents, manatees and the entire economy of Crystal River.

Steve Gibbs is a freelance writer in Memphis, Tenn., with more than 25 years of experience writing about public works infrastructure; e-mail: [email protected]