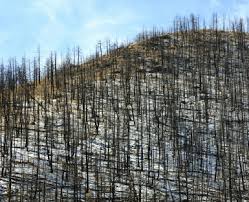 Water quality can be substantially diminished for several years after wildfire in response to relatively common local thunderstorms, according to a recent USGS study.

USGS scientists led by research hydrologist Sheila Murphy collected extensive streamflow and water-quality data for three years after the Fourmile Canyon Fire, Colo., in a geographic setting typical of the American southwest. They then correlated the results with data from a high-density rain gage network.

“Unfortunately, wildfires have become a common occurrence in the western United States,” said William Werkheiser, USGS Associate Director for Water. “We need to better understand the drivers of post-wildfire water quality and find ways to adjust to this challenge.”

About half of the water supply in the southwestern U.S. is supplied by water conveyed from forests, which generally yield higher quality water than any other land use. However, forests are vulnerable to wildfire; more than 12 million acres of land, including important forested water-supply watersheds, have burned in the southwestern U.S. in the past 30 years. Wildfires increase susceptibility of watersheds to both flooding and erosion, and thus can impair water supplies.

The USGS investigators found that hydrologic and water-quality responses downstream of the burned area were primarily driven by small, brief convective storms that had relatively high, but not unusual, rainfall intensity. Suspended sediment, dissolved organic carbon, nitrate, and manganese concentrations were 10-156 times higher downstream of the burned area compared to upstream, and reached concentrations that could impair the ability of water-treatment plants to effectively treat water for human consumption.

Results from this study quantitatively demonstrate that water quality can be altered for several years after wildfire, even in a watershed that was only 23% burned. Because wildfire frequency and size, and possibly storm frequency and intensity, are projected to increase in the southwestern U.S. in the future, post-wildfire water-quality impacts may become more common, compounding water supply and quality problems related to projected decreases in runoff and continued population growth.

Recently published in the journal Environmental Research Letters, the study suggests potential adaptation strategies to avoid the introduction of problematic constituents into water-treatment facilities or reservoirs after wildfire.