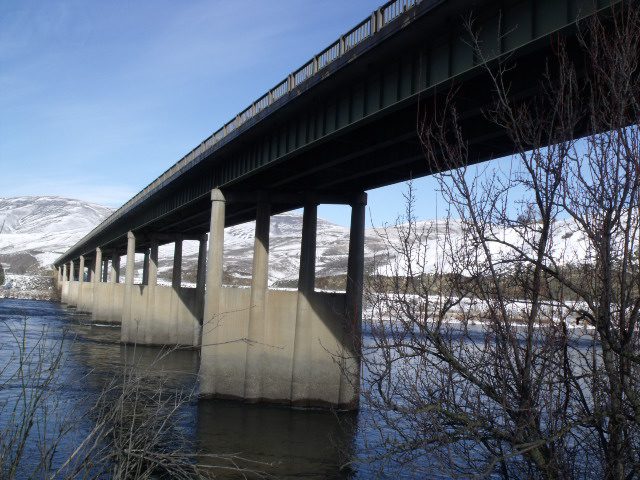 LEWISTON – The Spalding Bridge repair project in Lewiston was presented with an American Association of State Highway and Transportation Officials (AASHTO) President’s Award for environmental stewardship at AASHTO’s annual meeting in Chicago.

The Clearwater River is one of the most scenic rivers in the United States. It contains robust populations of fish and wildlife, and provides a rich history. The Middle Fork of the Clearwater River was one of the first rivers designated under the U.S. Wild and Scenic Rivers Act. Anglers and paddlers from all over the world travel to experience the Clearwater’s thriving fisheries, thrilling whitewater and spectacular scenery.

The project involved a fast-moving body of deep water that runs at an average 15,300 cubic feet per second, requiring ITD to develop innovative mat-placement techniques. The water moves too fast for divers, so ITD developed unique solutions involving GoPro cameras, time-lapse photos, and aerial monitoring from a drone to ensure proper placement of A-JACKS mats. A-JACKS is an articulated riprap technology that provides armoring protection for bridge foundations and piers. 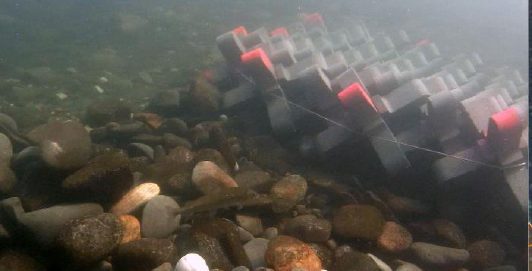 Crews placed nearly 400 concrete A-JACKS mats, weighing 2,700 pounds each, on the riverbed to provide armor against erosion. The voids in the mats provided a support system for the river gravel and improved fish habitat.

The bridge, built in 1962, was rated among the top 10 most scour-critical bridges in the state — at risk of failure due to erosion. The A-JACKS technology helped ITD complete the project ahead of schedule and under budget. Because of heavy river flows, had this project not been done, the bridge could have failed, resulting in injury, loss of life, and destruction of critical habitat for bull trout, Chinook salmon, and steelhead—all threatened species. This technology provided substantial environmental benefits to the marine life and to the Nez Perce Tribe, who rely on the fish for sustenance.

ITD coordinated with the Nez Perce Tribe’s employment rights office and the Idaho Department of Fish and Game, and obtained permits from the Environmental Protection Agency (particularly the 401 permit). One-half of the crew working on the project were Nez Perce Tribal members.