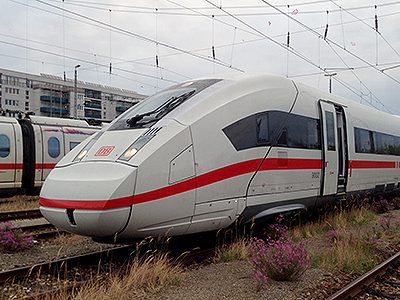 As of today, the ICx – the new high-speed train from Siemens built for German rail operator Deutsche Bahn (DB) – is underway in Germany’s public rail network. Siemens began the train’s first high-speed trials today. Beginning with a maximum speed of 160 kilometers an hour, speeds will be gradually increased to the top speed of 250 kilometers an hour. The test trials are being conducted by DB Systemtechnik.

The trial runs will test the train’s functions, above all the bogies but also the interaction with existing infrastructure, in particular control and safety systems, as well as the interaction between wheels and rails, and between the pantograph and the overhead contact line.

The ICx will be the backbone of the Deutsche Bahn’s future long-distance network. In May 2011, the German national railway company concluded a framework agreement with Siemens Mobility for up to 300 trainsets. It is the largest train contract that Siemens has ever won in its more than 160 years of corporate history.

In the initial phase, 130 ICx-type trains have been ordered, and beginning in 2017 they will replace the Intercity and Eurocity fleets put into operation between 1971 and 1991. At a later time, it is planned to replace ICE 1 and ICE 2 vehicles. The ICx will then be responsible for roughly 70 percent of Deutsche Bahn’s interurban transport revenue.

The ICx sets new standards in intercity traffic. A unique train concept has been developed, that means it can be individually adapted to the requirements of various transport tasks. The modular drive concept is based on independent Powercars with identical traction technology, resulting in more flexibility than ever before. High operational availability is guaranteed by a large number of reliable systems with high redundancy.